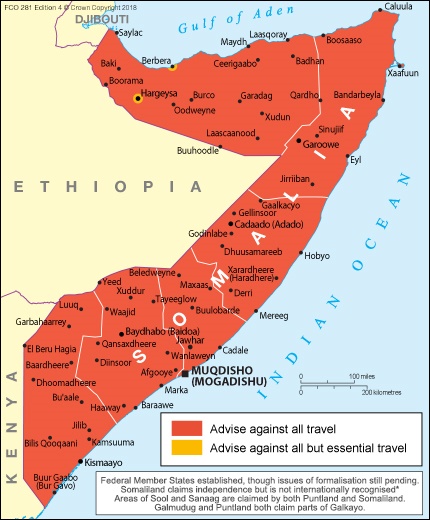 If you visit Hargeisa or Berbera, exercise a heightened level of vigilance and take care in public places where people gather. Monitor local and international media to avoid any demonstration or disturbance taking place. Leave any area of unrest quickly and don’t attempt to watch or photograph it.

Terrorists are very likely to try to carry out attacks in Somalia. There is a high threat of kidnap throughout the country. Terrorist groups have made threats against westerners and those working for western organisations. There is a constant threat of terrorist attack in Mogadishu and terrorists continue to plan attacks against westerners in the rest of Somalia, including Somaliland. Terrorist attacks could be indiscriminate, including in crowded places, high-profile events, events involving government officials and in places visited by foreigners. Due to their use by government officials, hotels are considered legitimate targets by terrorist groups. See Terrorism

All areas across Somalia are suffering food shortages resulting in the displacement of thousands of Somali people, including those caused by Tropical Storm Sagar in May 2018. See Local travel