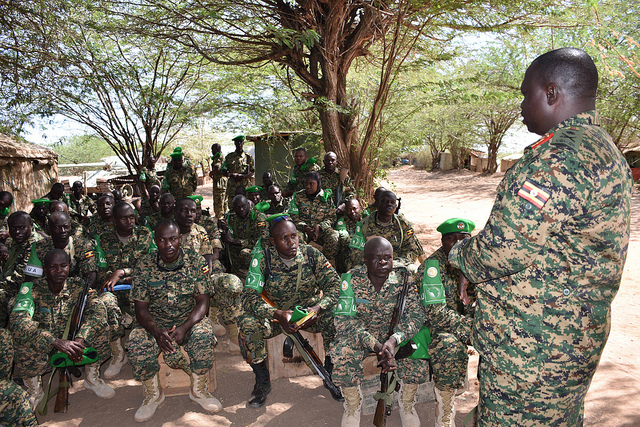 Mogadishu, 16 February 2019 – Uganda’s Commander of Land Forces, Lt. Gen. Peter Elwelu, made a working visit to Somalia this week, where he interacted with troops in AMISOM’s Forward Operating Bases (FOBs) located in areas under the control of the Ugandan contingent.

On Thursday, February 14, Lt. Gen. Elwelu visited troops in Barawe, Bulomareer, Qoryoley, and Ceeljaley-Marka, all located in Sector One, which is secured by Ugandan troops.

“What concerns us now is the welfare of our troops in the Mission area,” said the top commander during his visit to the military bases.

“Protect yourself, work as a team in order to overcome the challenges that you face and consolidate the achievements made so far,” he told the troops.

Gen. Elwelu further advised them to remain alert and closely monitor the movements of the Al-Shabaab extremists.

“Remember that Al-Shabaab are at home. They are not in hurry. When you relax, that is when they will strike,” he cautioned them.

During the meeting with the Somali officials, the Commander of Land Forces expressed gratitude to host communities living near the Forward Operating Bases, for the support they have accorded AMISOM troops.

“Without your cooperation, our soldiers would not manage to operate effectively. Indeed, you have hosted us as brothers. We pledge to work together to sustain the achievements realized in Somalia, because if Somalia is peaceful, Uganda will also be at peace,” he told the leaders.

Underscoring AMISOM’s achievements since 2007 when the AU troops first deployed in Somalia, Lt. Gen. Elwelu noted that Somalia was well on the road to full recovery.

The top military official concluded his visit to Somalia today.