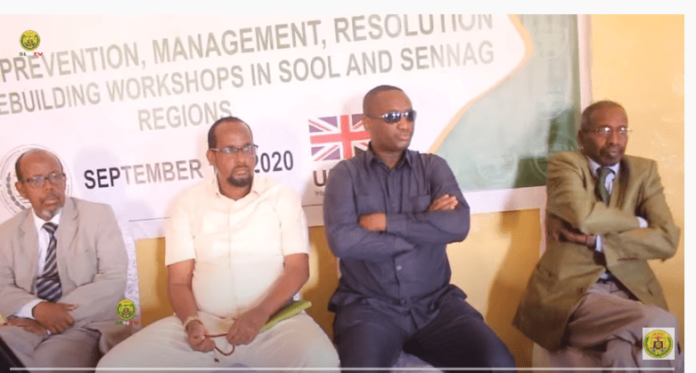 The Inter Governmental Authority on Development (IGAD) organized the two day meeting with the funding of UK Aid.

Men & women delegates designated as ambassadors who will be working on peace building issues and the resolution of inter communal conflicts that transpire among the communities.

During the meeting, the delegates will be educated on ways to prevent hurdles that lead acrimony and ways to further resolve.

Sool’s governor, Abdikani Mohamoud Jidhe, in a key note address at the opening of the meeting stressed that the meeting is crucial to the delegates drawn from the regions that have been hampered by recurring conflicts and inter communal clashes.

Both officials reiterated that the meeting is aimed at addressing ways to find out a common resolve to the recuring insecurity hurdles in the regions.

The governor said: “The meeting was held for Sool & Sanaag regions in order to encourage progress and peace building.”

In his remarks, the mayor said that the meeting is a historic for Lasanod to host such a conference organized by IGAD.

IGAD representative to Somaliland, Ali Hussein Ismail alias Shombe revealed that IGAD has been working on this project to be carried out in troubled regions in Somaliland.

He emphasized that peace building must a vehicle for getting development projects from the int’l community.

Shoombe said: “The meeting is all about prevention of conflicts, building peace initiatives, and managing peace. Development coupled with security. Since the outbreak of Tukaraq clashes, We encouraged IGAD to carry out peace building projects in the region.”

Shoombe further said that once peace is achieved that IGAD agreed to implement development projects once the residents are ready to observe peace and stability.

The attendees were urged to learn from the training and go back to their residences in a bid to help locals to refrain from conflicts. 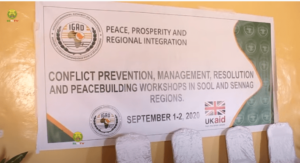 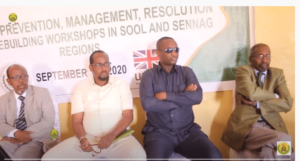