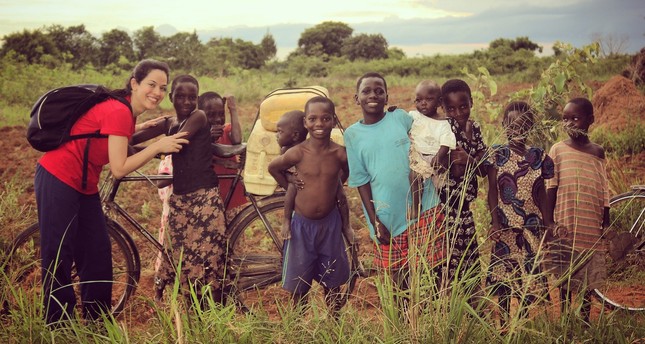 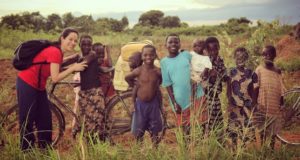 Banu Çiftçi lends a helping hand to the needy in Africa, where she says most of the diseases are caused by malnutrition.

Obstetrician and gynecologist Banu Çiftçi lends a hand to women in Somali, Uganda, Ethiopia and Congo as a member of Yeryüzü Doktorları (Doctors Worldwide) and touches every soul she treats in the faraway lands

Banu Çiftçi is a young, good-humored, excited and idealist woman. She is an obstetrician and gynecologist. On her YouTube channel, she talks about the difficulties of being a woman in the geographies she has visited. She is self-confident and witty.

When I met her, I became curious about her medical journey from a clinic in Nişantaşı, one of Istanbul’s fanciest neighborhoods, to Africa.

“I go to Africa to help myself not them. I am happy if I can be helpful. I satisfy myself as a doctor in Africa. The thankful looks of the patients that I treat there give me spiritual peace. I call it the alms of my occupation,” Çiftçi said.

Her biggest dream in life is to be a good person. Therefore, she touches both people and their hearts. She is assertive to bring goodness to everywhere she goes. She opened 10 water wells in Africa when she was there, collaborating with her followers, and conduced to set many iftar tables, providing victuals.

We met Doctor Çiftçi, who has delivered more than 2,000 babies to date, at her clinic and listened to her life dedicated to goodness and the stories of the women she met in her medical journey from Istanbul to Somali, Uganda, Ethiopia and Congo.

In Africa, people find happiness despite all 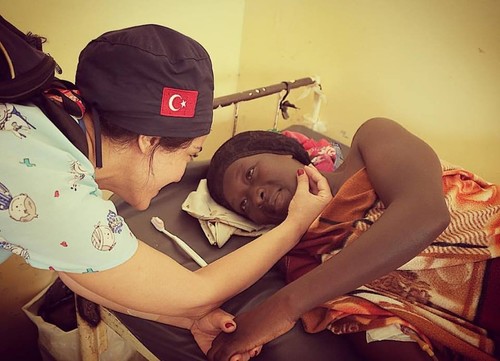 When I first sat down with Çiftçi, I wanted to ask about her photos taken in Africa. She is pictured smiling all the time around patients.

“When expectations are low, the index of happiness increases,” said Çiftçi. “People are hungry and away from health opportunities there. They even do not have a shelter. You think people cry and live a life of great misery. However, when you go, you see that everybody is happy. Then, you think of why they are happy even though we are not and we have everything.”

“You go on a protein diet to be fit here but most children’s stomachs are swelling in Africa because of protein deficiency. Even they are happy. Ours is the unhappiness that is brought by modern life. When demands and expectations increase, people think that they always have to reach something. People in Africa do not have any of this but they are still very happy,” she added.

After years of serving in Africa, Çiftçi said the spiritual satisfaction she gets has no match.

“I have relieved people’s pain for years in Africa. When they look at you, they thank you with their eyes which touches your soul. We go to these lands to help ourselves not them. There is no other supreme spiritual peace for me,” Çiftçi said.

People who know her or follow her on social media want to help when she goes to Africa.

“When I was in Africa, I shared some posts on social media. My followers said they also wanted to do something when they saw the women and children we were treating. The biggest need was clean water because the children were drinking muddy water under our eyes. Opening a water well costs up to $5,000. I didn’t think we could raise that kind of money. However, $50,000 was raised and we opened 10 wells. Students gave money from their pockets. If a child helps his or her peer in Africa, this child will be a good person in the future because she or he has learned to help someone,” she said.

Hunger, the cause of diseases in Africa

Çiftçi said that the diseases of people in Africa originate mostly from malnourishment.

“They are mostly hungry. There are some places where they can find fish but they do not eat it. The reason is that they are convinced that eating fish is forbidden in their religion. All the fishes there go to different regions in the world. People are misinformed and cannot benefit from this good food that God gave us. We told them the truth and explained eating fish is not forbidden. However, they were so stuck on this idea that we could not change their thoughts,” she explained.

Çiftçi also mentioned the stories of people who walked for kilometers and waited for days to be treated.

“There was a patient who had a hernia. He came a long way. He needed an operation and was smiling when he heard the news. I asked him whether he was scared or not. He said that he waited for it for years and would get rid of his pain at last. He was grateful to us after the operation. We saw it in his eyes,” she said.

“We treated a mother with ultrasound for the first time. We told her the gender of her baby. She was shocked and asked how can we know. She saw her baby on the screen for the first time, she was smiling. We can regularly see our babies in four-dimensional ultrasounds but we are definitely not as happy as she was,” she added.

Çiftçi has a book and an app on pregnancy

After delivering more than 2,000 babies, Çiftçi created a mobile phone application – “Banu Çiftçi ile Gebelik” (Pregnancy with Banu Çiftçi) – so she can answer questions whenever, wherever. She also has a book, “Hamilelik & Doğum” (“Pregnancy and Birth”), where she explains everything a young mother to be needs to know during pregnancy.