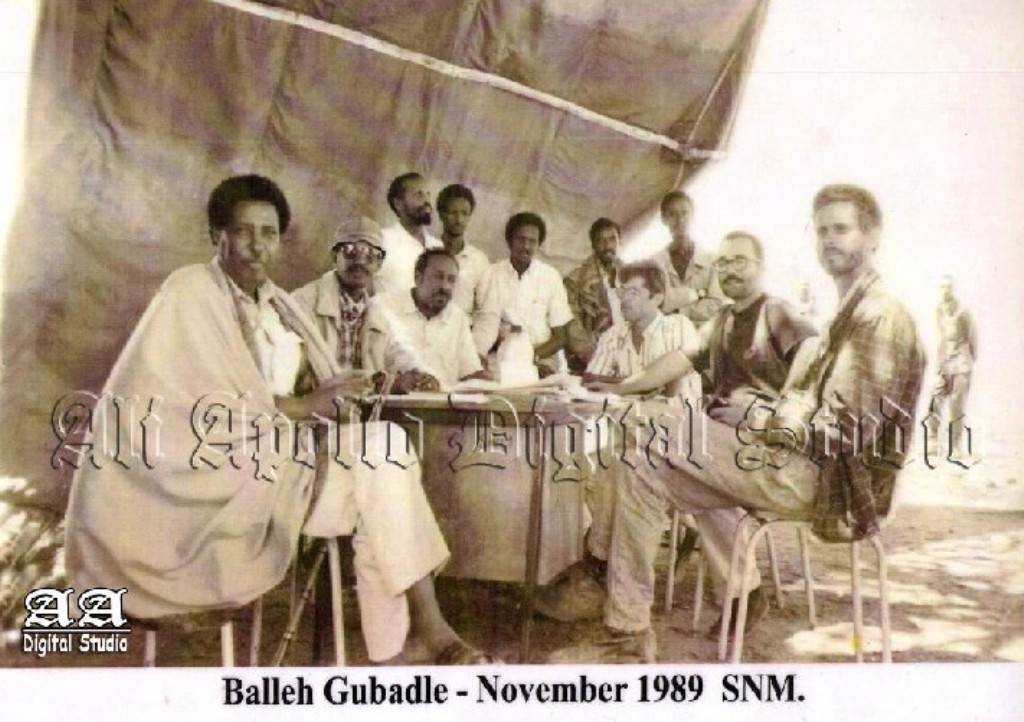 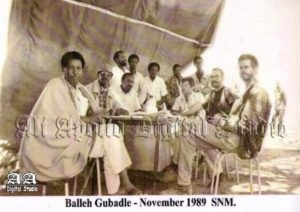 This conference was held in Burao from 27 April to 18 May 1991. It was a historical conference. The conference was organized by the SNM leaders, chaired by the Vice Chairman of the SNM, Hassan Essa Jama.
The conference was attended by representatives of clans in the north and the elders asserted themselves as an autonomous force and fully established its role as an institution in the leadership. The conference was the starting point for the new potential powers of the Guurti in Somaliland. The decision makers were the clan elders. No one was at a gunpoint to endorse the withdrawal from union with Somalia. In fact, politicians had divergent ideas whether it was the right time to declare independence and what approach to take but the majority of them were for the reclamation of independence.

The purpose of the conference was the reaffirmation and cementing of the peace across all regions of the North (Somaliland). Throughout the period of the conference, extensive consultations, deliberations, and wide discussions were not spared. The conference was attended by representatives of all clans who inhabit in Somaliland as well as all the categories of the Somali society.

The conference finalized and formalized the peace agreement earlier made in Berbera as a starting point for unity among all people in the north. The final outcome of the conference was declared on 18 May 1991 and a declaration of independence was signed. The conference participants overwhelmingly agreed to restore Somaliland’s sovereignty and borders by declaring withdrawal from the union between Somalia. They also agreed to continue the peacebuilding process.

Another important issue discussed was the vitality of preparing for setting up of civilian government and whether that civilian government should have an executive president or a constitutional president and a prime minister. The former chairman of the SNM, Abdirahman Ahmed Ali, was chosen by a majority vote in favor of the first executive provisional president and Hassan Essa Jama as the Vice President for a term of two years.

The overall majority of the Convention consisting of the representatives of the people and the SNM fighters and commanders fully supported the declaration of independence and regaining of the territorial integrity of Somaliland. The representatives 17 clan elders signed a document ‘declaration of independence of Somaliland’. The conference agreed that extra efforts for peace had to be made in Erigavo and Sool regions.
The SNM leadership took the mandate to draft a constitution and prepare Somaliland for elections in the future.
The memorable Borama conference

This conference was held in Borama from 1st February to 23rd May 1993. All clans were represented. The conference was attended by a 150 –member Council of elders and 500 representatives drawn from a cross-section of the society consisting of elders, religious leaders, politicians, ex-civil servants, intellectuals, and businessmen. The conference coincided with the end of the two-year term of the government elected at Burao in 1991 led by the late president, Abdirahman Ahmed Ali (Tuur). At that time there were different factional alliances rooted in previous differences by different sects within the SNM. The conference was held at a popular public school in Borama, Sh Ali Jowhar Secondary school.
The intention of the conference was to set grassroots-based peace and to place effective reconciliation initiatives in place. That target itself stimulated the impetus of holding the grand conference in Borama for representatives of the different clans. The conference marked a special defining event in the landscape of political history of Somaliland. It formed a watershed for the inception of the natural reputation of Somaliland and of the formation of statehood. The issues of representation and power sharing were dealt with decisively through the institutionalization of the clans and their leadership into the system of governance. The conference was a touching success. The principal achievements were: a) that a peace agreement and a security framework was reached in consensus; b) that a final peace was struck among the communities in the West; b) that a national constitutional charter was produced.; c) that Mohamed Ibrahim Egal was elected as the president and Abdirahman Aw Ali as the Vice president. A cabinet of 17 Ministers was chosen; d) that a 30-point Transitional National Charter was drawn; e) that a Council of elders ‘Guurti’ and the House of Representatives were established forming a bicameral Parliament. 75 members for each were nominated though the number was later increased as described below to 82.

A hybrid system of political representation was decided to be in place, i.e., mixing the traditional system and western form consisting of an executive president, an independent judiciary and bicameral parliament comprising of an upper House of Elders incorporating the ‘Guurti’, and a parliament made up of a lower House of Representatives (‘Golaha Wakiilada’) the members of which were nominated on clan basis by an electoral college of elders was taken.
The conference oversaw a peaceful transfer of power from SNM leadership to a new civilian administration headed by Mohamed Ibrahim Egal, a widely respected politician, and a statesman since the independence of Somaliland in 1960.

The conference produced a Transitional National Charter and an Interim Peace Charter. The conference defined the political and institutional structures of a three-year administration until the promulgation of a constitution. The Peace Charter entrenched the use of Somali traditional ‘Xeer’ as the basis of the law.

During the conference rival clan members accepted a deal in power-sharing treaties and agreed on the representation in the government and the legislature of the 82 members in each of the senate house (Guurti) and the house of representatives or parliament (Golaha Wakiilada). Egal immediately announced a non-clan pluralist system to propel the political process (Kibble, 2001:15) and aspiring parties were introduced to adopt an inclusive platform in an attempt to avoid clan and religious affiliations and loyalties.

The system of Government established in Borama was a community-based kind of ‘beel’ system, a power-sharing coalition government between all clans that inhabit in Somaliland. The ‘beel’ system was meant to be in place for three years but Mohamed Ibrahim Egal, the president, was re-elected for the next two years. This was because at the end of president Egal three-year term in early 1996, an advantage was taken of an emergency clause ratified at Borama agreement which resulted in Egal’s term being extended until the end of 1997 after which a convention was called again along the same lines as the Borama conference.
In 1994 during Egal’s term, there was a conflict between two clan militias that broke loose around Berbera and Buroa. The situation was serious and fear of a civil war was felt imminent. However, once again the traditional conflict resolution and peace reconciliation efforts, Somaliland style worked again and saved the country from another disaster that hovered around. A peace summit was organized at Sheikh.
The period of the presidency under Egal was difficult. But nevertheless, tangible achievements were made. In February 1994, Egal’s government and the Guurti (the Upper House) initiated a process of demobilizing and disarming the armed clan-based militias roaming at will. The process of demobilization was extremely successful in laying firm for the foundation of peace, security and the stability of Somaliland. That was followed by another peace summit at Sheikh.

Sheikh summit
The peace summit was organized to mediate differences which resulted in the serious rift that emerged in 1994 between two major groups within the Isaaq clans of the SNM alliance around Burao and Berbera towns. Somaliland drifted into a crisis and was then on the verge of conflict. This conference had the purpose to bring those clans together closely. The conference was named as the brotherhood summit (Shirkii Walaalaynta Beelaha). What is Interesting here is that it was specially initiated and encouraged mainly by the elders from non-Isaaq clans who took the responsibility to intervene and called for that meeting. The mediation was very successful.
Hargeisa conference

This conference was held from October 1996 to February 1997 at the Labor House (Guriga Shaqaalaha) Conference Hall, Hargeisa. The conference was attended by 315 delegates from across Somaliland (164 were members of the elders ‘guurti’ and representatives, the rest from the different categories of the society and 100 observers). The conference was chaired by Sheikh Ibrahim Sh Yusuf Sh. Madar; the vice-Chairs were Dr. Mohamed Abdi Gabose and Sultan Abdirahman Sheikh Muhumed and attended by most of the traditional chiefs and elders, Sultans and Garaads of Somaliland. The panel consisted of Sultan Esse Suldan Hersi Ghani, Sultan Mohamed Sultan Abdulqadir, Garaad Abdulghani Garaad Jama, Garaad Ismail Ali, and Sultan Mohamed Sultan Farah).

The main achievements of the conference were: a) agreement on the show of a signal for formal ending and conclusion of the civil war in the North. b) Successful ending of conflicts between clans was reached; c) election of President M I Egal with the majority for a second term while Dahir Rayale Kahin was chosen for the Vice President post. Suleiman Adan Mohamoud and Eng. Mohamed Hashi Elmi were the other contesting candidates for the presidency. Egal immediately appointed his cabinet of ministers. This time the term for the presidency was agreed to be 5 years rather than the 3 years as was previously agreed at the Borama conference. d) During the conference the existence of some values and trust between the clans were confirmed even more strongly; e) demobilization and disarming of clan militias were made peacefully. It is often considered that the day Somaliland set the foot on the road to nationhood was actually the 23rd of February 1997.
Inter-clan peace summits
It is important to mention that even after the major and grand peace conferences a series of both inter-clan negotiations were held across Somaliland such as Oog (February 1991), Yogori (March/April 1991), Hudun, Garadag (November – December 1992), Shimbiraale (August, 1992), El-Gohle (1992), Borama twice (1991 and 1992), Sheikh (October 1992), Hargeisa (October 1992), Dararweyne (Jan.-February 1993), Jiidale (October 1992), Garadag (November 92- Feb. 1993), Ainabo (April 1996), Gashaamo (June 1996), Duruqsi (July 1996), Waraabeeye (August 1996), Camp Abokor (June 1996) to settle differences in the past and for purposes of consolidating peace and security in Somaliland. Without the Somaliland elders (Guurti) who were the organizers and the vanguard in implementing, all those negotiations would not have taken place.
The road to peace and stability in Somaliland was not set at ease but took a long winding path and a tedious process but with patience, perseverance, honesty, and commitment of the people of Somaliland. In other words, the peace relished today did come overnight.
Nothing of the kind of peace summits, conferences and consultations and efforts in search of reconciliations and peacebuilding processes took place in Somalia despite a countless number of externally organized peace conferences despite the international community support, promotion from transitional governments to the presently recognized government of Somalia s=dominated by lack of security, stability and democratic principles. No effort of reconciliation and intermediary between the different clans and groups who are being/still at loggerhead since after the collapse of central government in 1991 was attempted. A countless number of superficially cosmetic peace conferences (about 20 in total), all of which were externally sponsored organized, were held outside Somalia (Sodare, Djibouti, Asmara, Nairobi, Eldoret, Embagathi ) save two of them (Garowe I and II) which were also externally sponsored. Such conferences and meetings were all organized, hosted and funded by outsiders, i.e., the international community and the neighboring countries of Ethiopia, Kenya, Uganda, and Djibouti. Not a single one of them was organized by the Somalis themselves. Comparatively, however, indigenously organized negotiations in Somaliland led to peace, reconciliation and finally formation of the essential democratic structures.