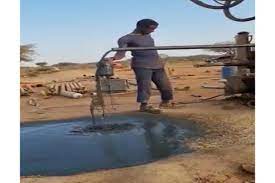 The prospective oil investigation conducted in the Baha-Damal well establishes the revelation that there is oil in that well, announces Energy Minister Abdillahi

Somaliland government has now officially announced that there is indeed oil at Baha-damal in the Salahley district and that it would be drilled in due course.

The revelations were made by the energy minister Hon. Abdillahi Farah who disclosed the fact that the results of prospective investigations of the coveted commodity are positively established and that, officially, there was oil to be extracted.

The minister was addressing residents of the area while leading a delegation. He was flanked by his education colleague Hon. Ahmed Mohamed Toorno in a delegation that included Civil Aviation Head Mr. Omar Sayid Abdillahi, several minestrial DGs and numerous parliamentarians.

They were hilariously welcomed and received by the residents.

“I would like to first reveal the results of the prospective investigations that were carried out at the Baha-Damal oil well site and it is now official that there is indeed oil”, said the minister happily.

He noted that the country has been searching for oil since 1956, “and the last one is the company that is with us now, which is responsible for the Bahadamal well”. He pointed out that the same company has been prospecting also in the Saraar and Togdeer regions and their surroundings for the past 17 years.

He said that by God’s grace, the Salahley one is now viable, hence would be extracted in due course this year.

He said that the efforts have, at last, become a reality.

Hon. Ahmed Mohamed Diriye who also addressed the residents described the fete as a historical moment for the country, and particularly for the area.

He underscored the fact that the commodity to be extracted was a natural resource to be shared nationally.

A lucky strike occurred a couple of months ago when a resident whose land was being drilled for water had oil gash out, and then the specimen was confirmed.