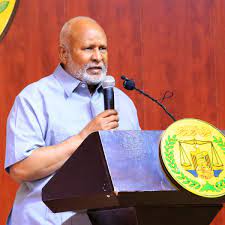 The Speaker of the Senate, the GUURTI, has directed the members to join the concerted efforts underway of bolstering the conciliatory dialogues of achieving lasting peace in Lasanood.

Hon. Suleiman Adan underpinned the importance of having the Elders to blend in the conciliatory efforts as per the country’s tradition in achieving peaceful stability.

He at the same time moved for a 15 day recess in order for the MPs of the Upper House of the Parliament to. At the same time, also get involved with mobilizing the populaces to register themselves in large numbers in the exercise which is underway.

It was the 80th sessional seating which came after the elders had just returned from a 45 day break.

The Speaker said that calm has to a large extent returned to the area following protest riots that claimed fatalities.

They would bolster another national team led by interior minister Hon. Mohamed Kahin Ahmed and several cabinet members who are already in Lasanood on pacification mission.`