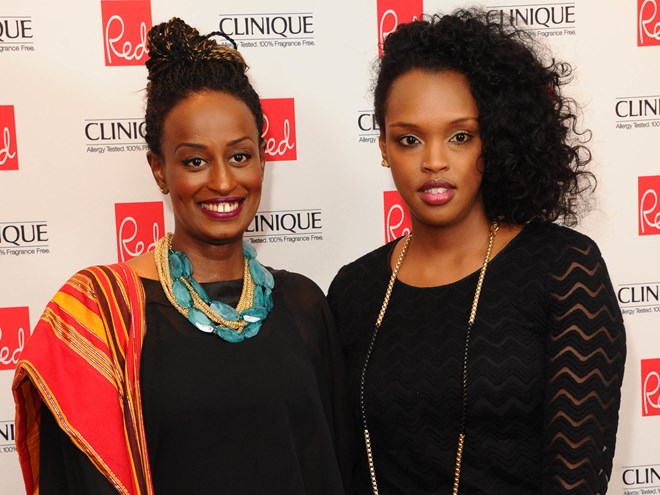 Leyla Hussein and Nimco Ali, co-founders of a nonprofit group that seeks to eliminate female genital mutilation, were honored by Queen Elizabeth II for their work.
Stuart C. Wilson/Getty Images

Leyla Hussein had mixed feelings when she found out that Queen Elizabeth II was naming her an Officer of the Order of the British Empire for her work to eliminate female genital mutilation.

“I had to think hard about whether to accept,” she says, citing the British history of colonialism. But in the end, proud of being British and living in a country that took in her parents as refugees from Somalia, she accepted the honor, along with fellow activist Nimco Ali.

As young girls, both Hussein and Ali underwent female genital mutilation, or FGM, the practice of cutting a young girl’s genitals, typically as a coming-of-age ritual. Across the world, an estimated 200 million women have undergone FGM.

The two women and Sainab Abdi are co-founders of Daughters of Eve, a British nonprofit that “recognizes FGM as gender-based violence,” provides services to victims of FGM and lobbies the government to end the practice in the U.K. and beyond. Based in part on their efforts, last November the U.K. pledged £50 million to help eliminate FGM across Africa.

Last weekend, the queen recognized Ali and Hussein at her annual Birthday Honours Ceremony with the OBE award, presented to individuals who have made contributions to arts and sciences or had distinguished careers in public service or charitable organizations.

NPR, which has interviewed Hussein and Ali in the past, caught up with the two women to find out about their recent work, what this award means to them and what still needs to be done to stop the practice of FGM.

The interviews have been edited for length and clarity.

Congratulations on the award! How did it feel to receive this honor from the queen?

Hussein: To be honest, I’m not the biggest royal fan. I had to put up a statement to be clear I wasn’t. [But] a group of people discussing FGM in a room is always a plus.

Ali: It was incredibly humbling. I ended up getting the letter the day before I had to reply. It came to my brother’s house, he said, “oh there’s a letter from the queen and it says you have to reply by Monday morning!” I had to take a picture and email it to them (laughs).

There are other women tackling FGM that have been awarded before us. [The award] just gives more visibility to the campaign, and ultimately it’s raising the conversation, saying we’ve achieved a lot.

We have to raise the bar in the U.K., and we know we need to end FGM, but now we can say, these are the successes we’ve had.

What are some of those successes?

Ali: From a U.K. perspective, there has been incredible legislative change. We lobbied parliament to add FGM to the Children Act, [which criminalizes violence against children]. Now, British girls have more rigorous protection than they ever had. If a child is at risk of FGM, the state can step in and be their guardian.

Hussein: We are talking about it, so that’s a big progress. But we’ve got a lot of work to do. Until there are convictions for FGM practitioners under the U.K.’s child abuse laws], I won’t see any progress.

We’re certainly better than we were ten years ago; it’s important to remember the women before us, who took more backlash than we did. But I’ve been coming out of a 48-hour online trolling because of my OBE [award]. I think someone’s gonna physically harm me, they’re threatening to rape and kill me or hurt my child. I have a panic alarm in the house. It’s crazy. People need to realize we’re taking a huge risk when we do this. It’s scary. I’ve been taking snapshots of messages all day that I send to police. I have a police officer I work with directly, and that shouldn’t be the case.

What are some of the biggest misconceptions about FGM?

Hussein: People keep calling it ritual or cultural practice, which minimizes what it actually is. There’s nothing ritual about violating children.

And it’s not [just] an Africa or Asia issue. I was in the U.S. and met white women from Kentucky who’ve had FGM done. Their parents were conservative Christians working in Guinea and thought it would be a great idea to have them mutilated. The idea of controlling women is where it comes from. It’s important to see this as the bigger problem it is.

To any white American, anyone who might not feel connected to this subject, I would say: If you’re someone who understands that women all over the world are oppressed, this is no different.

Some Kenyan groups, like Maasai Sisters, are going to dramatic lengths to protect girls from FGM — like taking them out of their homes and placing them in school. What do you think of these kinds of efforts?

Ali: A lot of the [best] work is coming from grassroots activists, women who are survivors of FGM themselves. In Somaliland, [where I’m from], we’ve been lobbying our president to get legislation, opening up conversation around an issue that’s so taboo.

Change is possible but not inevitable. To get change to happen, it should be led by women survivors.

Every country has its own ways of working. The idea that every FGM-affected community needs the same mechanisms — that’s what NGOs think — is a fallacy.

In the Gambia, there’s an incredible woman named Jaha Dukureh, she’s a Gambian-American [who] ended up chasing down the president to pass legislation against FGM. Soon, she’s holding a summit in Senegal that’s the first survivor-led conference on the issue. Women in Africa are taking charge, and I think we have a duty to deliver the support they need to end FGM in their own community.

Susie Neilson is an intern on NPR’s Science Desk. Find her on Twitter at @susieneilson.