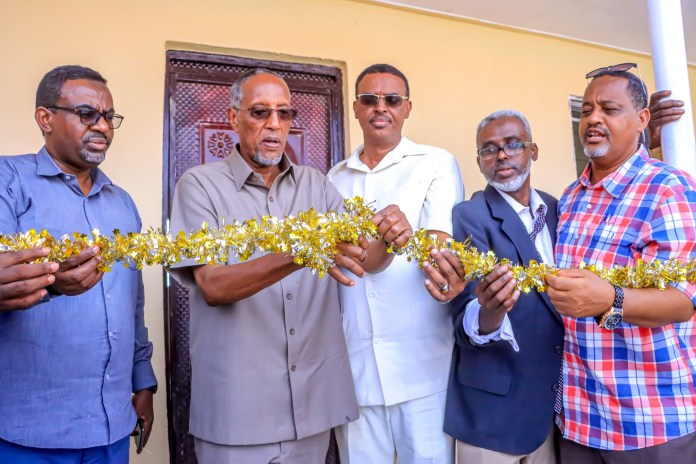 The President H.E. Musa Bihi Abdi, who has just completed almost a fortnight-long trip across the country ended it with the opening of a technical skills section added to Dabayl-weyne boarding school at Ma’aneeye trading centre in Mandera district on Friday.

The President was hosted at the school’s hall by the “Dan iyo Duco” community association who threw a luncheon in his honour and that of his entourage.

Various leaders spoke at the venue including the community leaders, education fraternity and the local administrative leadership.

They praised local education and its development in the area of moulding of the young as leaders of tomorrow.

Elder Muse Hirsi Abokor who was speaking on behalf of the DAN and DUCO committee in charge of the school thanked the president for accepting the invitation and called on the local community to support the government in any development.

The Head of State who was flanked by several ministers thanked the local community and the school management for the prominent role they played in the development of education, and urged them to redouble their efforts.

He inaugurated a new building where technical skills will be taught, which has been added to the boarding school.

On the other hand, the President who spent ten days in his trip that spanned five of the eastern regions of the country, took stock of the living conditions of both the people and livestock and held meetings with the elderly and intellectuals of the regions and districts he traveled.

He similarly inaugurated several projects in Sahil, Togdeer, Daad-Madeed, Saraar and Sool regions that the government implemented in those regions and funded from the national budget.

The President has also launched new projects to be implemented by the Government within the regions during the trip.

On the other hand, the intellectuals, the elderly, the scholars, the youth, the women, warmly welcomed the President and his delegation and expressed their support for the President and the government he is leading.

They thanked the President for the various Water, Health and Education projects that the President and his Government have implemented in the areas where they live.