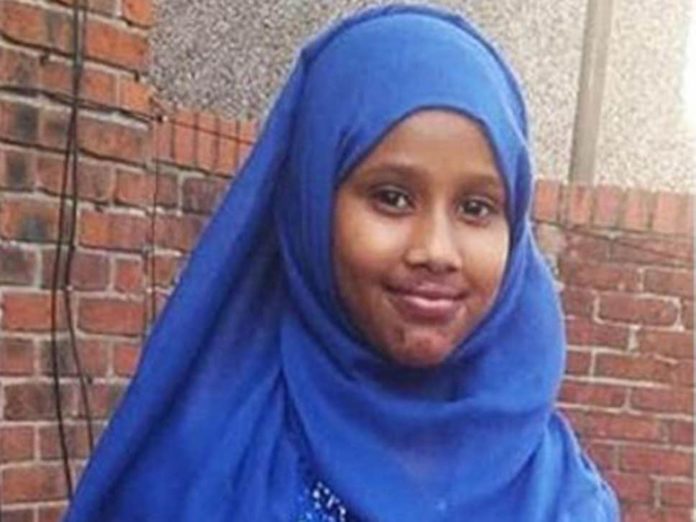 On 17 July, at least 150 British Somalis marched to parliament, led by Dr Aayesha Hassan, demanding justice for Shukri Abdi, a 12-year-old girl who was found dead on the 27 June after drowning in the river Irwell in Bury, Greater Manchester. The marchers were angry that nothing had been done to achieve justice, and that Shukri’s mother  Zamzam Ture is deeply dissatisfied with how Shukri’s case has been handled by police. “If the rights we came to this country exist, I want something done” Zamzam told the Guardian last month.

Shukri’s mother has explained that her daughter couldn’t swim, therefore the suggestions by police officers that Shukri was in the river swimming expose their lack of both common sense, and commitment to the case. After a short investigation, Greater Manchester Police (GMP) passed the case on to the Coroner’s Office, and the circumstances surrounding Shukri’s death are now being treated as “unsuspicious”.  Her mother, Zamzam now wants to know what Shukri was doing at the river and why the police and school refuse to take her concerns seriously. Zamzam Ture’s lawyer, Attiq Malik, says that “The family’s firm position is [that] they have only been treated in that way because of their race, and had it been a different racial background more sensitivity would have been given, more investigation would have been done,”

“Shukri’s mother has explained that her daughter couldn’t swim, therefore the suggestions by police officers that Shukri was in the river swimming expose their lack of both common sense, and commitment to the case”

Shukri’s mother has said that her daughter was heavily bullied during her time at Broad Oak Sports College. During a moving interview by Documenting Oppression Against Muslims, a collective dedicated to “visualising oppression against Muslims worldwide”, Zamzam Ture says that her daughter’s school wasn’t doing enough to keep her = safe while she was in attendance despite her reporting bullying “many times”.

Shukri arrived in the UK two years ago with her mother and four siblings as a refugee of the Somali civil war. Her mother has said that she brought her children to Britain so they could have a better life but in the case of Shukri, that sadly hasn’t happened. The language barrier, different customs means and xenophobia in the UK means children from migrant families are often have a harder time settling into school and they are often victims of bullying. Many people have drawn comparisons to Jamal, a Syrian refugee who was “waterboarded” by school bullies back in 2018: another case where the school hadn’t ensured student safety.

The Justice for Shukri campaign started with a petition to Greater Manchester Police and to James Frith, MP for Bury North. It highlighted concerns from the Bury community about the school’s failure to deal with cases of bullying and demanding “Greater Manchester Police to conduct a fully transparent investigation into the circumstances leading up to and surrounding this tragedy”. The campaign promptly gained momentum on social media with people using the hashtags #justiceforshukri and #justice4shukri to voice their dissatisfaction with how Broad Oak and GMP have dealt with Shukri’s case. The petition now has over 80,000signatures, but still no action has been taken by GMP.

“Her mother has said that she brought her children to Britain so they could have a better life but in the case of Shukri, that sadly hasn’t happened”

A London protester that I spoke to reiterated concerns the Somali community has around the welfare of children in school, “they [schools] need to support students who are bullied. It is not enough. Bring in staff who can deal with bullying, anything is better than this.” Broad Oak Sports College is currently under special measures after being deemed a failing school during its last Ofsted inspection. All areas of the school were ruled inadequate by inspectors in May 2018.

After pressure from the community in Bury, Broad Oak headteacher issued a statement on the 4  July regarding Shukri, a week after her death. In the statement, Paul Greenhalgh says “we will focus on the school’s anti-bullying policy and procedures and other policies relating to the welfare of children” which perhaps shows that the school is owning up to the fact that their current anti-bullying policy has fallen short. Sadly, this isn’t the first bullying controversy surrounding Broad Oak: in 2015, a teacher at the school died by suicide after being bullied by staff.

Shukri’s case must be afforded much more time and energy. There are unanswered questions and inconsistencies in the version of events that had been given to Shukri’s mother. For Shukri’s mother, who believes that GMP are treating her differently because of her race, her daughter deserves justice and for her that means an investigation in which her concerns are listened to instead of ignored.

Whatever the circumstances surrounding Shukri Abdi’s untimely death, her case deserves a full investigation. Her school must also accountability for their role in failing to provide sufficient care to their students. As the Justice for Shukri campaign continues to gain momentum, it doesn’t look like people are willing to forget. While GMP and Broad Oak Sports College remain silent the community is driving the case for Shukri’s justice.