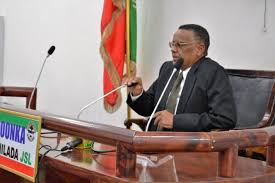 The Somaliland House of Representatives has rejected a motion to increase the members of the National Elections Commission, NEC, from seven to nine.

At a session this morning in Hargeisa, the House whose mandate expired in 2010, and has continued to sit on extension after extension, has blocked the motion which was the outcome of an accord between the three Somaliland political parties.

The agreement between the parties, which was brokered partly by the EU envoy, Nicolas Berlanga Martinez, was to find a resolution to the political impasse pertaining to the scheduled parliamentary and local elections council.

The Speaker of the House, Bashe Farah, suspended the session, when it become evident that the representatives were about to vote down the motion. It is not clear whether it will be resubmitted after mature consideration.

It is quite clear to all Somalilanders and it’s supporters across the globe, that this current House of Representatives and it’s members are one of the main stumbling blocks to holding elections, along with the discredited NEC, the stagnated House of Elders, the opportunistic political parties and the general malaise pertaining to democratic progress.

The House of Representatives has also been struggling with the issue of whether or not to increase the number of seats from the current eighty-two, 82, which had been extensively lobbied for by the regions and communities who feel under-represented.