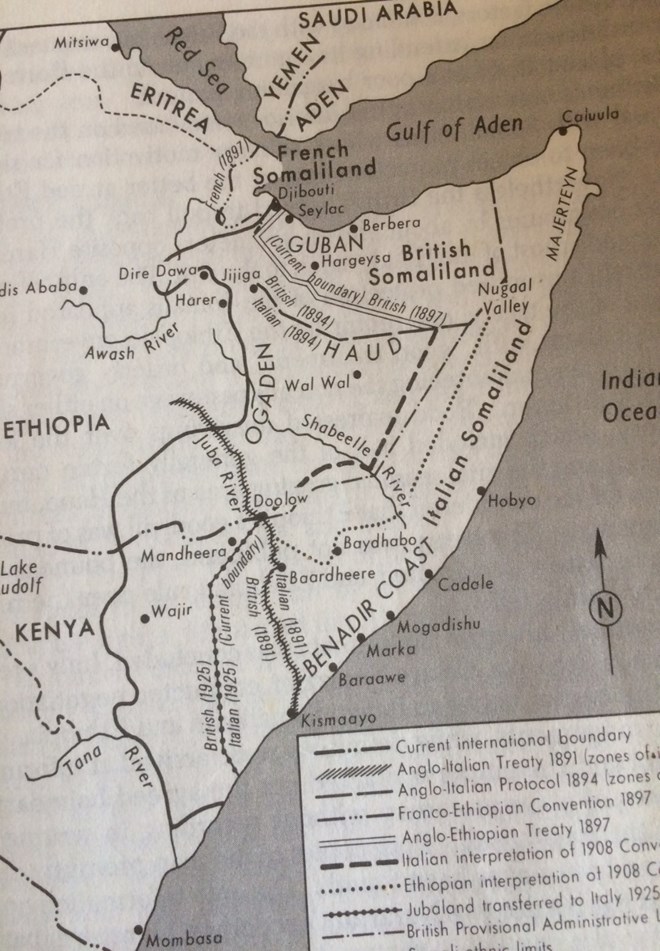 Among other things, leaders of Somaliland base their claim for statehood that Somaliland was once British protectorate and gained its independence on 26th June 1960 within defined borders. It joined the former Italian Somaliland in political union on 1st July of the same year. However, it withdrew from the union and restored its lost sovereignty in May 1991 because the union had failed. Then a majority of people in Somaliland voted for independence in a referendum held in 2001.

Much has been said and written about the rights and wrongs of these hotly debated topics. And I am not going to repeat them here again. However, I believe the claim that the defunct British Somaliland protectorate was within defined borders requires particular attention.

the reality of the situation was the defined borders were among other boundaries created by Britain, Italy, Ethiopia and France, then colonial powers. Just like other nations, the Somali-populated lands (nation)  was subjected to arbitrary divisions along land and ethnic lines by their colonial masters in pursuit of their colonial ambition and interests.

Indeed, as the above map clearly shows colonial powers treated the Somali-populated lands just like a geography exercise under which Ethiopians, French, British and Italians settled their conflicts and disputes by drawing lines on a piece of paper as their “boundaries” within the Somali-populated lands.  As outlined on the map there were multiple treaties, conventions and protocols, which included:

The thrust and the spirit of these treaties were no more than to ensure that each colonial power got the bigger share of the cake as they divided the Somali-populated lands among themselves. It is obvious how the Somali nation had been reduced to a commodity, which exchanged hands between the colonial masters.

As they say a picture is worth a thousand words. And I therefore leave to the readers’ intelligence to reach their own conclusion about the arbitrary nature of these boundaries created by the colonial powers as they went to occupy and conquer the Somali peoples’ lands.

For the sake of argument, let us accept Somaliland’s reliance on the outdated colonial borders as a legal base for its quest for statehood. Then the question is what about other border treaties, protocol and conventions seen on the map, and how far should we go back to history? This is because these treaties have had implications on the Somali nation, for example recent wars with neighbouring countries, such as the Ogaden war, which was a direct result of the arbitrary colonial borders.

To make the point, in 1897 Italy and Ethiopia tried to demarcate boundaries between the Italian Somaliland and Ethiopia in a convention known as the Menelik-Nerazzini Treaty. Led by the powerful Emperor Menelik, Ethiopians claimed their boundary to be as close as to Baydhabo town in the Bay region and at Balcad, a town about 36km north-east Mogadishu. In 1908 both parties attempted to resolve the border dispute but failed due to their different interpretation of the 1897 treaty (see the Italo-Ethiopia interpretation of 1908 Convention on the map).

Therefore, the question is should leaders of today’s Ethiopia be allowed to claim their border with Somalia to be as close as to the Benadir coast in accordance with their interpretation of the 1908 protocol?