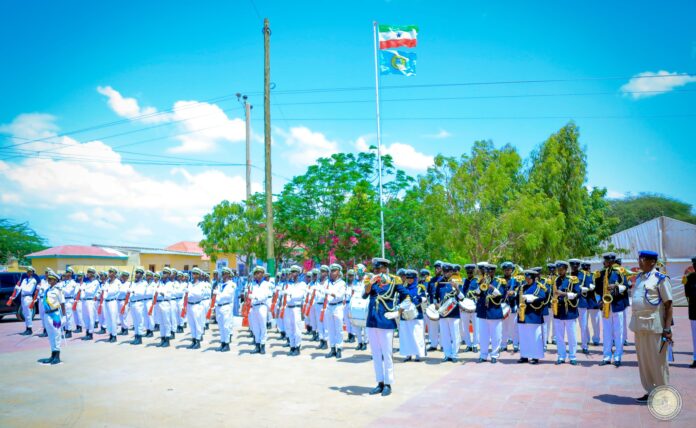 A large event commemorating the 27th anniversary of the founding of the Somaliland Coast Guard was held at the headquarters of the coast guards.

The event was graced by the president, members of the cabinet, parliamentarians, commanders of various military arms, ambassadors, and heads of various organizations that have close cooperation with the Coastal Guard and other guests. Various speeches were given and concerts testifying the fetes  Coast Guard in the nation filled the stage.

First of all, a film was shown about the work of the Coast Guard and a drama about how the Coast Guard is the backbone of the country’s development and the security of the long coast of Somaliland, including numerous milestone achievements to ward off piracy, in their line of duty over a long time, was witnessed. and they have implemented a lot of security and stability.

The commander of the Coast Guard of the Republic of Somaliland, Admiral Ahmed Hure Hariye who spoke there, explained in depth the different history of the army, the efforts they have made, and how they have dedicated themselves to the heavy work of their nation. and he congratulated all Somaliland coast guard forces on the 27th anniversary.

The Minister of Interior, Hon. Mohamed Kahin Ahmed who spoke also emphasized the importance of the Coast Guard and how they contribute to security and fighting natural disasters such as hurricanes and fires.

The President of the Republic of Somaliland, His Excellency Muse Bihi Abdi, who delivered a multi-faceted speech on the occasion, emphasized the importance of the Coast Guard in the nation.

President Muse Bihi Abdi said that the Coastal Guard forces have achieved great achievements in a short period of time that deserves to be congratulated.

He said, “We are all here to congratulate and praise the progress made by the coast guard forces of the Republic of Somaliland. They have fulfilled their national duty from the beginning.”