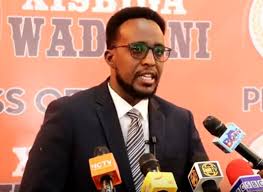 The leadership of Wadani party’s youth wing has tendered resignation today after the end of their term in office.

Mohamed Sidik Dhame, the chairman of Youth wing, announced that the 12 member strong leadership group have all tendered their resignations.

He added that he will not seek re-election to the leadership of Wadani party youth wing.

Instead, he said he is ready to take up a new responsibility within the party.

Mohamed Sidik Dhame said: “Because we have completed our term, today we are announcing that we are vacating the office for the next youth leadership. That is because, we want to set a precedent to become the first party youth leadership elected democratically and leave office democratically.”

The Secretary General of the youth wing, Abdifatah Said Jambir, on his part, announced that the entire leadership decided not to seek re-election. Instead, he said they will give a chance for upcoming leaders.

Abditafah said: “Although the party bylaws permit us to re-elect to office, we will not run. We will give the chance to SL youth who are keen in politics to take the party further than we did. This is a precedent in SL politics.”

The 12 members Wadani party’s youth wing were elected in March 2015 at the party’s conference in Hargeisa.

They were supposed to hold an election in March which was postponed due to the fears of Covid-19 pandemic.