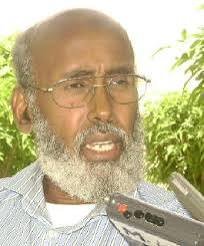 The two men featured in these photos were both officers in the armed forces of the late Siyad Barre regime in Somalia. Ahmed Mohamed Hassan was an Air Force pilot who flew Mig jets, Yusuf Abdi Ali, aka Colonel “Tuke” was the head of the 5th Brigade in Gabiley, Somaliland.

Both men were trained at great expense by the defunct Somali Republic to serve and protect their citizens.

In 1988, at the height of the civil war in the defunct Somali Republic, Pilot Ahmed Mohamed Hassan was given orders to attack the city of Hargeisa which was at that time under attack by fighters from the Somali National Movement, SNM. 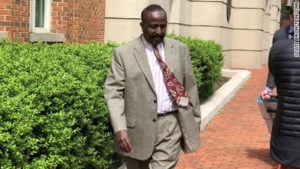 Because, the SNM soldiers were inside the city, it was difficult to separate between legitimate military targets and civilians. However, this did not stop the forces of the Barre regime from indiscriminately shelling the city.

The jet fighter pilot, a man of incredible integrity and humanity, took off as instructed and instead of dropping his bombs on the city, headed out to the Red Sea, dropped his bombs into the sea and flew on to Djibouti, where he landed safely, and sought asylum. Today, he lives in Europe and recently paid a visit to Somaliland.

The other man, Col. Yusuf Abdi Ali, aka “Tuke” engaged in sadistic torture of civilians, from dragging victims behind vehicles until they were shredded to bits, to burning the remains of the dead and dying, to summary executions and unspeakable torture methods against the people of Gabiley.

Col. “Tuke” was recorded on video issuing the infamous order “only the crows should be left alive in the city”, hence the nickname, “Tuke”, meaning crow in Somali. After the war, and the fall of the Barre regime, he fled to Canada, only to be confronted by the very same people he had terrorized and tortured. His asylum application was revoked and he was deported from Canada.

Colonel “Tuke” haunted by his actions in Somalia fled to the United States of America. He worked as a security guard and later as a taxi driver. But, justice continued to follow and finally, this week in a court in the state of Virginia he was found guilty of torture in a civil case. He will most likely have his status in the United States revoked and deported back to Somalia.

One man, Ahmed Mohamed Hassan, was a brave person, the other was and remains a coward. The people of Somaliland will always remember both men and their different actions.