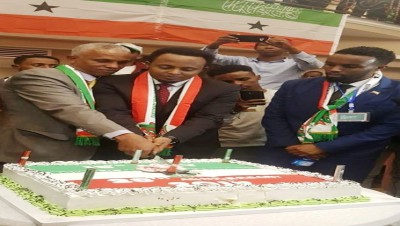 The Republic of Somaliland has celebrated its 28th Anniversary of National Day in Addis Ababa.

Somaliland’s Ambassador to Ethiopia, Salan Hassan Abdilleh, during the occasion said that the 18th of May has a huge significance for Somaliland not only because it’s a self-declared date of independence for 28 years, but also as inspirational date and hope to endear and envisage for the future of the country.

The Ambassador added that Somaliland is keen to strengthen long outstanding ties with Ethiopia in economy, trade, security, military and educational cooperations at highest level.

The relationship between Somaliland and Ethiopia is strong and growing in areas of security, economic, trade and educational cooperation, it was noted.

Ethiopia is using Berbera port for some of its import and export businesses. In partnership with foreign investors, specifically from the United Arab Emirates, Berbera Port was inaugurated at a cost of USD 442 million. Ethiopia obtained a 19 percent share of the port in 2017. It was envisioned that the new port will be used as a regional trading hub.

Ethiopian Airlines, some private universities and other businesses are working in Somaliland, it was noted.

In the 28 years since, Somaliland has continued to call for recognition. It has maintained stability and held elections. It has its own flag, parliament, currency, national identity. It has also developed on various economic and social measures.

Although not recognized as a sovereign state, Somaliland declared its independence from Somalia on May 18, 1991.