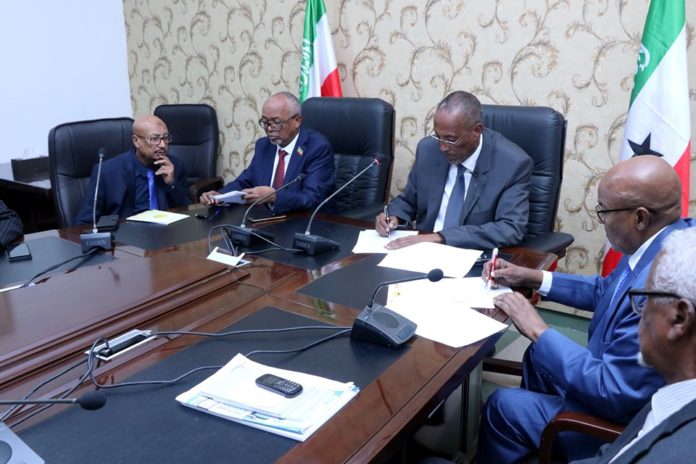 At a meeting held in the Presidency in Hargeisa, on Saturday, July 27th, the President of Somaliland, Muse Bihi Abdi and the two chairpersons of Waddani and UCID parties, Abdirahman Mohamed Abdillahi “Cirro” and Faisal Ali Waraabe, signed an accord pertaining to the scheduled parliamentary and local council elections.

The accord  which addresses the main issue concerning the Somaliland National Elections Commission, NEC, proposes increasing the membership of the commission from seven to nine members.
The accord will be sent to the House of Representatives as a motion, for a vote and if the motion passes, then the NEC membership will be increased.
However, if the moribund House of Representatives fails to pass the motion by September 1st, 2019, then the NEC will remain at seven members and the motion will be placed before the new parliament after the elections are held.
Although the accord and it’s proposal appears to address the main impediment to holding the scheduled parliamentary and local elections, whether it will pass the House of Representatives and become law, remains to be seen.
Ali Mohamed Abokor
ruraledcomm@yahoo.co.uk