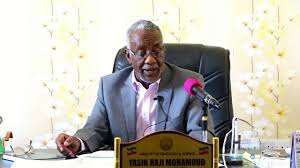 HARGEISA– The government of Somaliland has dismissed the proceedings of Red Sea Summit by Arab and African countries in Riyadh.

The governments reiterated its previous stance towards regard and cooperate with the policies so long as excluded as an important stakeholder.

In a press statement, the ministry of foreign affairs clarified that SL is a sovereign country and will not delegate its territorial waters to another country. Somaliland says it recognizes strategic importance of the Red Sea for peace and security of the region and in principle welcomes the need to develop a common position to protect these waters.

Somaliland has secured its 850 km coastline from any threats including piracy and all forms of terrorism. This is according to the ministry of foreign affairs.

The foreign affairs noted that safeguarding the security of the Red Sea and Gulf of Aden waters concerns all countries that share these coastal waters. Somaliland says it supports multilateral resolutions to the common challenges.

However, Somaliland has stated it will not recognize the formation of any blocks that exclude legitimate stakeholders. The statement concluded that Somaliland looks forward to any cooperation that actively contributes to security and the prosperity of these areas without compromising the sovereign of any other country

In Riyadh on Monday, the Council which includes Egypt, Jordan, Eritrea, Yemen, Sudan, Djibouti and Somalia signed a founding charter of the Council of Arab and African States bordering the Red Sea and Gulf of Aden.