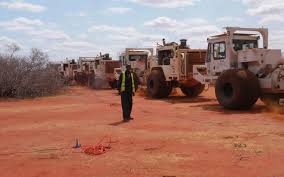 The exploration of hydrocarbons in Somaliland started in 1912 when an oil seep at Dhagah Shabel, 38km southeast of Berbera, was reported. From that time to 1990 several exploration wells were drilled throughout the country and small amount of free oil were recovered from two wells in Dhagah Shabel area. The exploration of petroleum in the country intensified in the late 1970s to 1990 where GECO conducted an extensive offshore speculative seismic survey in the Gulf of Aden for the Somali government, and Quintana Oil Company and Hunt Oil Company conducted a detail exploration programme which included aeromagnetic survey and a seismic programme over two onshore blocks. While From 1986 to 1990 Conoco Oil Company carried over 4000km of 2D seismic survey in area within their old blocks which covered almost 98,700km2, in Nugal basin of Sool and Togdheer regions of Somaliland.

In recent years Genel Energy plc and RAK Gas LLC entered into production sharing agreements with the government and started the hydrocarbon exploration process by conducting geological surveys to study geology, sedimentology and structures of the surface and perform comparison to the neighboring hydrocarbon producing countries such as Yemen. After that, gravity and aeromagnetic surveys were carried out by the two companies to identify the subsurface basins and the depth to which sediments are buried.

The basins identified by the initial stage of exploration (gravity and aeromagnetic surveys) required a more detailed study and techniques to identify subsurface structures and locate possible reservoirs and traps where hydrocarbons can accumulate, and in order to achieve that end a 2D seismic acquisition project was conducted.

In Dec 2016, BGP Inc. (a Chinese national seismic contractor and the leading company in onshore seismic won the international tender held by the Ministry) began the acquisition of seismic data for Genel Energy on blocks SL6, SL7a, SL10 & SL13 in a multi-client 2D seismic acquisition project managed by the Ministry of Energy and Minerals; and it was concluded in Jan 2018; resulting in acquiring 3,500km of seismic data. The second project of the multi-client project has been concluded six months later, July 2018, acquiring nearly 800km of 2D seismic for RAK Gas on block SL9.

Processing and interpretation of the acquired 2D seismic data of over 4,300km lines in five blocks, together with basin analysis has yielded in identification of multiple stacked prospects, and now we have – along with our partners – a clear vision of the prospectivity of Somaliland basins where the oil and gas exploration surveys took place and exploration drilling is planned in the near future.

After the results of the interpretation of seismic data were obtained; it became necessary to perform further and detailed studies to increase the probability of finding commercial accumulation and decrease risks of unsuccessful drilling which is the last remaining stage of the exploration stages.

Hence, in mid 2019; RAK Gas carried out a microseepage survey in the western parts of Block SL9; in order to minimize the risks of drilling exploration wells in that block, while Genel energy implemented another kind of seepage analysis called macroseepage in late 2019; also to de-risk drilling wells and better understand the seismic data results.

Macroseepage is about detecting and analyzing visible oil and gas seeps on the surface such as soil stains and tar. Oil and gas are buried in deep surfaces and due to the reservoir pressure it may migrate through faults and rock fractures to the surface, and once it is at the surface it can be seen and collected for further studies. While macroseepage can decisively mean the existence of working petroleum system and can indicate the migration routes and direction usually along the faults and towards edges of the basin.

On the other hand microseepage analysis is used for detecting changes in near-surface environment caused by hydrocarbons accumulated deep under the surface, lighter hydrocarbon molecules (methane, ethane, propane and so on) tend to escape from reservoirs and move vertically to the surface as migration of hydrocarbons depends on two factors: pressure and buoyancy. These changes or alterations caused by buried hydrocarbons can be observed and analyzed from shallow soils, water and sediments and can to extent reveal the existence and productivity of reservoirs which in turn adds to minimizing risks of drilling.

Although the initial results of the interpretation of both macro and micro seepage surveys seem to be very promising; it is yet to be completed, and as we stated above it is essential for de-risking drilling wells and better understanding the results of the seismic survey.

Exploration drilling is planned in the coming year, to determine whether the targeted hydrocarbons are commercial and viable for production or not, especially after the successful completion of the previous oil and gas exploration stages (Desk study, Satellite Imagery, gravity and aeromagnetic survey, seismic acquisition, processing and interpretation project and macro/micro seepages).