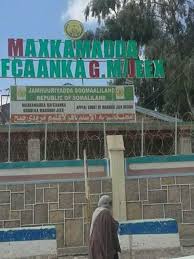 The three lawyers have recently spoken to the local media citing injustice has impacted on Somaliland justice and judiciary system.

Official statement issued by Dr. Ali Suudi Dirie, the chair of appellate regional court has relieved the three lawyers from their duties with immediate effect.

The Appeal court has leveled accusations against the lawyers saying that they have spread propaganda against the courts in the country.

The names of the sacked lawyers are:-