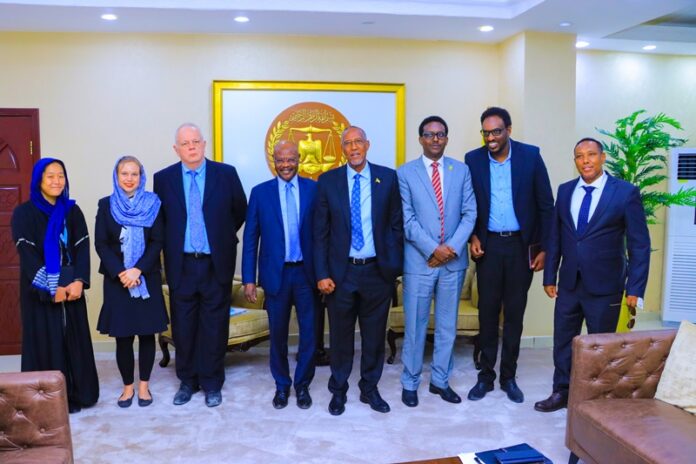 H.E Musa Bihi Abdi, President of Somaliland on Wednesday received Deputy Special Representative of the Secretary-General and UN Resident and Humanitarian Coordinator to Somalia/Somaliland, Mr. Adam Abdelmoula, who is on official working visit to the capital Hargeisa. Somaliland Head of State and UN senior official discussed on the cooperation between the two sides. Projects that UN implements in Somaliland and the role that UN could play in the relief efforts underway in Somaliland pertaining to the drought hit families were also high in the discussion.

The two sides also discussed Development Plans which will be aligning them with the national development policies and priorities. Somaliland government appealed to the UN to revisit its plan when it comes to the projects that is implemented in the eastern regions of Somaliland. The Gov’t called on the UN officials to consider increasing projects that will be allocated to the east of the country. UN delegation lauded Somaliland government efforts in which it swiftly responded to the aftermath of Sagar which hit the coastal regions in the country as well as keeping Covid-19 at bay.

UN said that Covid-19 vaccination conducted in Somaliland caught the attention of the world as the country does not have enough revenues as it is not internationally recognized. UN Delegation that met with Somaliland President were Head of OCHA, Makiha Kimura, Head of UNDP office in Hargeisa, Simone Strachan, Sabine Corrinna Friedrich, Mustafe Khayre and Abdi Askar who is among senior officials of UNDP office in Hargeisa.