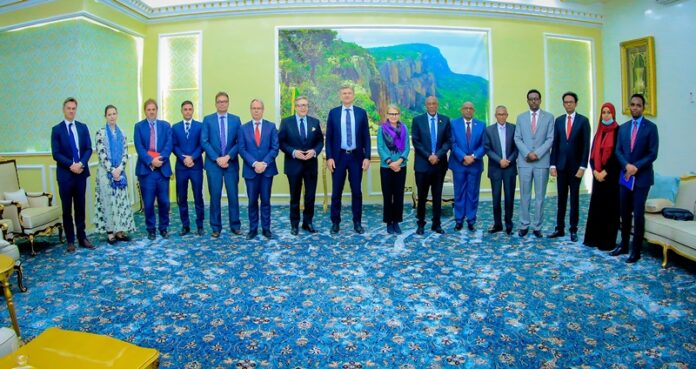 His Excellency, Mr. Musa Bihi Abdi, President of the Republic of Somaliland met a high-level delegation consisting of ambassadors accredited to Somaliland/Somalia including Swedish, Danish, Finnish, and EU envoys flanked by UK head of a mission to Hargeisa. Senior German officials plus officials from UK DFID were among the high level delegation that President Musa Bihi Abdi welcomed on Wednesday at the Presidential Palace.

Somaliland Head of State and the high-powered delegation discussed a wide range of issues pertaining to the upcoming elections, the situation of the impact of the drought that hit hard Somaliland regions, the third National Development Plan and the crucial role that Int’l partners could play in the implementation of the national development plan.

The two sides also discussed the stability in the Horn of Africa region and the crucial role that Somaliland could play. The meeting ended with common understanding and to bolster the cooperation based on the this year’s strategic plan. They also agreed to speed up the implementation of the projects in terms of priorities. Foreign, Finance, National Planning Ministers together with Somaliland Head of a mission to Kenya were in attendance.