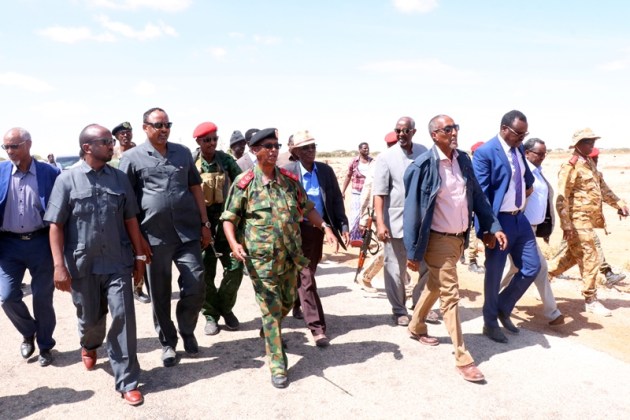 He addressed the armed forces personel at Tukaraq
By M.A. Egge

Hargeisa  ‘We need cohesive peaceful stability for the sake of tangible development to take place’ was the message of the President H.E. Musa Bihi Abdi carried for the nation as he spoke to a multitude of audience at Lasanod on his way back from Tukaraq where he addressed the members of the military.

In a moving and a passionate speech that was epitomize by patriotism, the Head of State called on the people to put aside petty issues and focus on peaceful solidarity and unity for the sake of posterity.

The President decried sporadic skirmishes that claimed untold lives leaving widows and orphans in its wake. Before addressing the huge gathering the President personally greeted hundreds of elders who lined up along the road by shaking the hands of each and almost all of them while happily exchanging words of jokes.

Earlier in the day the President reached Tukaraq where he addressed the military personnel whom he praised and motivated them by pledging that he is formulating a policy to hae the children of armed forces to get free education.

The President’s trip dubbed ‘peace and unity tour’ comes at a time that several incidents of thugerism hit south of Sool, precisely Dummay location, claiming a lot of lives.

The President was a day earlier tumultuously welcomed at Odweyne just as he was received at Burao, Ainabo and all along the centres and towns he passed through.

This journey that started this day a week ago saw the President kick of his tour in an effort to forester cohesion country-wide treated to hilarious ululations, tumultuous reception and happy faces welcomed him wherever he toured.

Similar receptions seen in Odweyne were reflected along the roads throughout Berbera, Sheikh, Burao Aynabo and Lasanod.

He toured and inspected various government installations. Of note is the new prison he inaugurated at Burao, plus the laying of foundation stones for deserving bridges and other infrastructures at various places.

Throughout the tour the President reminded the populace the need of supporting the government for any tangible development to take place or be made.

He repeatedly pointed out that even a mining plant cannot be installed at an earmarked place if the residents claim the spot in the name of tribalism. He described that such tendencies would curtail the nation’s development since the government cannot implement the policies it formulates.

The President portrayed real statesmanship in his choice of words and his oratory powers was formidable, depicting good grasp of the language medium he used.

He for instance moved people’s patriotic emotions as he endeared the populace of Odweyne to their government.

Similar emotions were evoked at Burao, Wadamago and particularly Lasanod.

The Head of State pointed out the fact that many an issue that renders brethren asunder pitting two communities against each other can be addressed swiftly, easily and in a timely manner.

He noted that if all the people were true to their aspirations then the whole nation can make gigantic steps towards development and progress at a go.

He underpinned that unity, stability, solidarity and peaceful scenario was indispensable when harmonious setting for development is needed.

The President is expected to leave the Sool capital of Las Anod this morning for Erigavo in Sanaag where he is to impart his message of peace and unity for a cohesive nation.