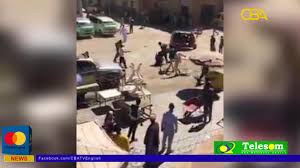 WAJALE–A shocking footage shows a police officer holding a woman by the collar.

Two officers are running towards the woman. She strove by the officers when she received two blows from two different police officers. Almost felling down, the police still dragged her when another officer kicks her hard in the stomach.

The police of the town keep firing while dragging the woman until she vanished from the sight.

Then the unidentified woman is said to be the relative of a man the police had shot dead on Saturday and left his body at an abandoned farm.

Although the police have not yet commented on the matter. The man is said to a suspected trafficker smuggling illegal immigrants into Somaliland from Ethiopia.

The family of the killed man was not informed of his death and his mother kept searching for him until Wednesday.

Local sources confirmed when the body was found on Wednesday a protest erupted in the city center in Wajale, a township that lies in the border between Somaliland and Ethiopia.

That is when the footage of the police brutalizing the woman was recorded.

This constituted a litmus test to the reforms promised by the new Police Brigadier General Dabagale who assumed office in last October.