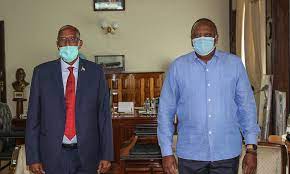 Somaliland has extended Condolences to Kenya following the Death of Former President Kibaki- President
The condolences were extended by Somaliland President Muse Bihi immediately after Kenya revealed the sad news that their former Head of State had died aged 90.
The President’s message via his official twitter handle @musebiihi read
“On my own behalf , that of the people and government of Somaliland I our heartfelt condolences go to the People and the Government of the Republic of Kenya, and the family and friends of late President Emilio Mwai Kibaki.
The late Kibaki was the third president of Kenya and the first from opposition and though credited with ushering in economic reforms and a new constitution he struggled to tackle widespread corruption during his 2003-2013 presidency.

Regionally the late Mwai Kibaki tried to bring peace to regional hotspots, with many missions to stabilize Somalia and other pockets of instability including Congo.

While Kenyan peacekeepers are still serving in southern Somalia, Kibaki’s predecessor has focused attention to Somaliland where his government has entered into a multi-pronged MOU.
The MOU that was signed by President’s Uhuru Kenyatta and Muse Bihi in Nairobi December 2022, has the following clauses 1.The two presidents reaffirmed their continued commitment to fostering friendly bilateral relations between Kenya and Somaliland. Both noted with profound satisfaction that the cooperation between Kenya and Somaliland based on common values and principles aimed at promoting an enduring peace, stability, sustained growth and shared prosperity. In this regard, they made a commitment to strengthen and deepen cooperation between Kenya and Somaliland.
2. The two leaders confirmed their responsibility to ensure peace and stability in the region, to enable populations to pursue social and economic development and stability. In this regard, the two leaders acknowledged that Somaliland has remained peaceful and stable over the years as a result of its commitment to democratic ideals and the development of strong governing institutions. Kenya and Somaliland would work together to promote peace and stability, and contribute to shared prosperity.

3.Kenya and Somaliland have also agreed to, direct flights from Kenya Airways and transport to Hargeisa, in what may be Africa’s second largest domestic carrier in Somaliland.
4. Kenya also decided to set up a consulate in Hargeisa in late March 2021, joining Ethiopia, Djibouti, Turkey and Taiwan, which have diplomatic relations with Somaliland.
4. In the joint statement, Kenya accepted that Somaliland also modernises its liaison office in Nairobi on the same date
5.The two leaders agreed timelines for completion and implementation of all agreed activities