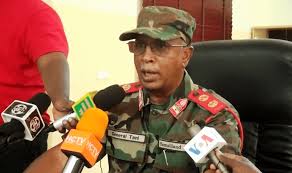 HARGEISA–Somaliland’s army chief Brigadier General Nuh Tani has said today that Puntland is engaged on aggression against Somaliland in the eastern regions.

The army chief has made clear that its defense forces are on high alert to conduct operations aimed at beefing security in the border with Puntland.

Puntland militia soldiers are shellng artillery to Somaliland defense forces stationed in the front-lines and further stated that if Puntland won’t stop the act of aggression that Somaliland forces will move forward and take control of the Falidh laale and God Qabobe.

The army chief has narrated that Puntland and Somaliland skirmished on three times where Somaliland forces overpowered their Puntland counterparts but constant bombardment and shelling from militia soldiers loyal to Puntland won’t be tolerated that transpire on daily day basis.

Hon. Nuh has revealed that Somaliland won’t ready to destabilize Puntland and has further elaborated that it is forces won’t disrupt the upcoming elections in PUntland.

The defense minister of Somaliland has acussed Puntland of deliberately breached the ceasefire agreement brokered by the International community namely the UN and IGAD.

Puntland is blamed for causing war in a tranquil provinces in Somaliland.

The minister has blatantly said that Somaliland is losing patience and wont bear with Puntland’s constant invasions and incursions.