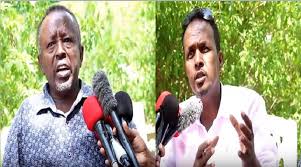 The Somaliland government continues to muzzle the independent press.

The last victims are Horyaal and Eryal televisions stations have been confiscated by security forces around 7 am in the morning.

The owners of two broadcasting stations have held press conference confirming the closure of the two television stations in Somaliland.

The government accuses of instigation of clans, covering news on armed forces, posing threat to national security and the unity of the populace.

The deputy head of intelligence agency in Somaliland was heading the operation of shutting down the two media houses.

The publishers argue that the letter was not official issued by the courts in Somaliland ordering the closure of the television stations.

The letter was written and signed by the current information minister, Hon. Mohamed Muse Derie.

The publishers who held a press conference claimed that there was no warning given before hand.

The television manager have said that even a copy of the suspension letters were not given to them.

The Somaliland Journalists Association (SOLJA) condemned the shut down  of the two television stations with the strongest possible terms.

Bihi’s administration has come under fire from organizations that are engaged on the protection of the free press that his government is muzzling the freedom of expression.

The government recently closed Foore newspaper which the court accused of insulting the president.