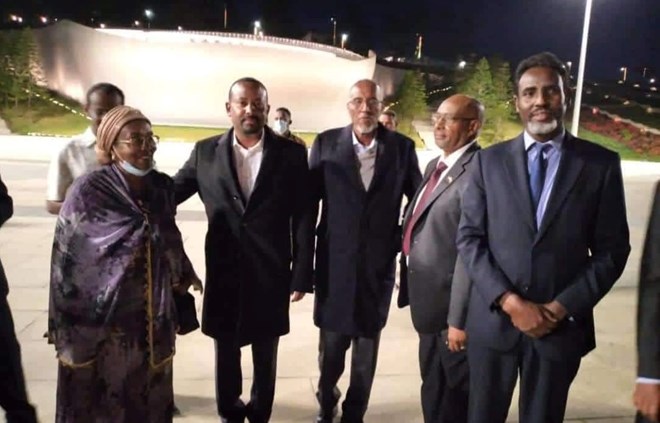 Addis Ababa–Ethiopian Prime Minister and Somaliland President met in Addis Ababa in a high-level discussion. This was confirmed by SL’s FM Dr. Essa Keyd Mohamud during an interview he gave VOA Somali service.

The two leaders discussed major issues concerning the countries ranging from security, trade, the bilateral relation between Ethiopia and Somaliland and most of all the region of Horn of Africa.

The FM said that the two leaders talks focused on enhancing the bilateral ties between the two countries.

Dr. Essa said: ” The two leaders held the meeting. They discussed the mutual interests of two countries. Issues that were high in the talks ranging from Berbera port, scholarships, and the bilateral cooperation between Ethiopia and Somaliland. The two countries have bilateral trade volumes, cross border movements and to maintain security were also high in the agenda of the discussions.”

FM Essa Kayd said that the two leaders discussion only concerned the bilateral relations between Ethiopia and Somaliland but they did not talk about issues pertaining to Somalia.

FM also confirmed that the delegation will hold high level meetings with EU embassies based in Addis Ababa.

Ethiopia, Somaliland share bilateral ties in the fields of trade, security and fight against terrorism.