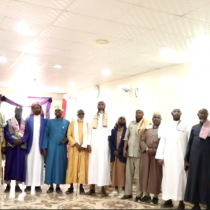 The Committee of Promoting Virtue and Prevention of Vice (CPVPV) in Somaliland’s Awdal province has formally accused of the governor of the region, Abdirahman Ahmed Ali of apostasy. In a press conference today, the Committee which is a non government religious body has doubled down its allegation that the governor insulted the religion of Islam.

Following a meeting for the leaders of the committee compromised of religious men through out the Awdal province, the Committee said the governor without a doubt abused Islam.

Sheikh Mohamud Farah Iidle, the spokesman of the group said that they have more than enough witnesses to testify that the governor has insulted the religion in public.

He stressed that they had not rushed into these allegations and of their pure intention to defend the religion.

Sheikh Iidle has reiterated their stance that insulting religion is apostasy and renouncement of belief.

He declined to outline the punishment of such a crime according to him.

The committee announced that it has submitted details of the case to the competent government authorities and called on the religious leaders of the country to closely follow up the case.

Insulting Islam or the prophets is considered a crime in Somaliland in many cases punishable by jail.

The alleged abuse of religion by the governor has sparked an outrage in Awdal province since last Friday.

Many prominent preachers denounced the governor on Friday sermons and called for an action against him.

The assistant interior minister, Nasir Aidid sternly asked the religious leaders to present clear evidences and eye witness against the allegations leveled against the governor.