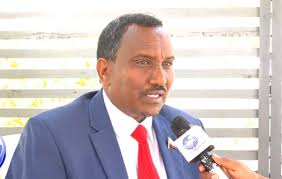 Ahmed Mumin Seed, the agriculture minister has on Sunday called on development agencies for an emergency meeting to facilitate a response for this impeding threat.

The minister has pointed out that reports from coastal areas in Somaliland have shown that nymphs left by last year’s desert locust invasion are showing swarm behavior.

He said that this attitude was triggered by the highest rains in the coastal areas of Somaliland.

Minister further asserted that the imminent swarms pose a serious threat to agricultural production in the country and food security for both farmers and pastrolists.

He further declared that the locust plight is beyond the capacity of the ministry of agriculture to effectively respond and therefore, called on the int’l agencies for immediate assistance.

It was last year when Somaliland government expressed fears that the cycle of the locust invasion in some parts of the country could repeat in the next rainy season.

This is due to the locusts leaving behind wingless nymphs that could start swarming in the coming rainy season.

The desert locusts usually have a shy solitary life and developed into a young locust then into a flying adult.

However, in special circumstances such as one vegetation dwindles and undergo a remarkable transformation and become social.

In this gregarious conditions, they form a group marauding pests of up to ten billion in ones swarm that still fields and destroy crops and pasture.

The worst swarms of desert locusts in decades of are now decimating crops and pastures across the Horn including Djibouti, Ethiopia, Somaliland, Kenya and Somalia.

FOA says Horn of Africa remains the worst affected areas with an unprecedented threat to food security and livelihoods.