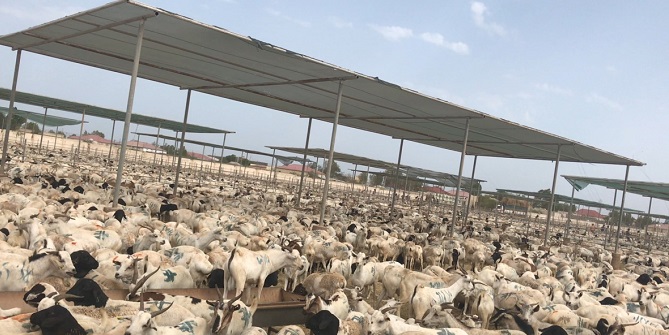 On 19 April Saudi Arabia temporarily lifted its ban on livestock imports from Somalia/Somaliland, in order to stabilise its own meat supply. Considering Somalia’s strong dependence on Saudi Arabia for livestock exports, this is an important economic boost to the wider Somali sub-region linked to this market. However, many concerns still remain, arguably more in the economic sphere than in terms of health, as this blog discusses.

A recent blog outlined a number of issues concerning COVID-19 in the Somali context, with a specific focus on the role and importance of the diaspora and their remittances. That blog highlighted the potential geographic and identity-based factors that might inform both the manifestation of the epidemic, as well as the secondary economic effects. Since that piece, the rationale for imposing lockdowns has been questioned in the African context (and can be questioned in many contexts in the Global South). This brief focuses on the emerging economic impact of COVID-19 in Somaliland, reflecting on its local specificities as well as the still unpredictable repercussions of disruptions and alternatives to existing global supply chains.1

At the time of writing there were 5 official cases of COVID-19, mostly in Hargeisa, from only 11 tests conducted; there are few diagnostic kits. There have been no deaths attributed to COVID-19 to date, in Somaliland. However, local populations believe the virus is more widely present and is spreading. The government in Hargeisa has implemented a partial lockdown. This largely affects only public offices, including schools and universities, as well as office-based businesses. Government has reversed its decision to close mosques for a period of four weeks after resistance from religious leaders who challenged the rationale for this when khat (a local stimulant, chewed in social groups) imported from Ethiopia has not been stopped, and while the restriction of social gatherings in khat chewing sessions, tea shops or the Ethiopian airline flights to Hargeisa have not been enforced.

Both global and local decisions have affected Somaliland’s major economic sectors including in aviation, hospitality and domestic transport. Hargeisa had regular flights to/from Addis Ababa, Dubai, Nairobi and Mogadishu; and Ethiopian Airlines and Fly Dubai have offices in Hargeisa. Somaliland was reluctant to close its airspace but decisions taken elsewhere have effectively made such closures inevitable. The Federal Government of Somalia’s  banning of both international and domestic flights has led to tensions with Somaliland over control of airspace. Ethiopian Airlines is currently the only carrier that has flights to Hargeisa but passenger numbers have significantly reduced.

However, a large part of the local economy, which relies on daily activities and exchange, carries on regardless; local markets and small shops are open. This is reported to be the same in Mogadishu and Garowe. Social distancing is materialising in Somaliland, as elsewhere, as an activity that only the relatively wealthy and well-informed can do.

Decisions made to close schools – government-run, private and Madarasas – have a huge knock-on effect within the informal economy, as the small shops and traders – mainly women – that supplied snacks and drinks to close to half a million children are now shutdown. Estimates indicated that this sector was worth US $3 million per month. Street vendors are also being evicted by the police and cleaners, working in homes and offices, have less work.

The two most important sources of income (and foreign exchange) for this aspiring country are remittances and livestock exports. The Berbera port of Somaliland is a key export hub for livestock to Saudi Arabia, Yemen and Oman. The former provides by far the largest market, notably during the Hajj pilgrimage (due to start in August this year), when an additional two million people are in the country for a month. During the Hajj season, livestock (sheep, goats and cattle) sales peak and bring in US $2-300 million for Somaliland. However, over 50% of livestock exports through Berbera originate outside Somaliland, coming from eastern parts of neighbouring Ethiopia, as well as southern and central Somalia.

Saudi Arabia had imposed a ban on livestock imports from Somalia/Somaliland in December 2016, though it temporarily suspended this ban during the Hajj seasons. The lifting of the ban, with the reported aim of strengthening local Saudi meat markets, should result in a huge inflow of livestock from Somaliland and neighbouring regions, through Berbera port. This was met with huge relief for the Somali people.

There is some possibility that demand for Somali livestock from the Gulf in the coming weeks will be higher than usual as exports from Australia have been constrained. This may provide some reprieve financially, however it would seem likely that the Hajj will ultimately be cancelled. Local livestock trade and demand is also likely to contract due to the financial hardships caused by COVID-19 although prices may reduce significantly if exports do not go ahead.

The involvement of diaspora populations in Somaliland are evident across all walks of life. Connections to the UK are particularly strong, with major populations found in London, Bristol, Cardiff and Birmingham.  There are some indications that Somaliland may be disproportionately reliant on remittances in comparison to other Somali regions, although accurate figures are not available.

A fall in remittance levels is already being noticed and is of concern to local people in Hargeisa. There are different reasons for this, including the reluctance of senders to physically visit shops and outlets, which is a common means of transferring money, as well as the difficulty money transfer operators face in gathering physical cash from agents in diaspora settings and moving that cash to their headquarters in Dubai, due to flight restrictions.

One of the results of this is that online providers for remittances are seeing an increase in registration and use of their platforms as more people move to these systems, as they can be used from home. This shift may reflect an acceleration of a process that was already underway. In Somaliland, Dahabshiil is a major business and an important symbol of Somaliland identity, innovation and success. It operates throughout Somalia and owns other businesses, as well as being an important holder of financial deposits. There are now at least three other platforms – WorldRemit, Taaj and GlobalSend – which offer online services, where Dahabshiil’s online platform has not yet taken off for a variety of reasons which are not yet clear.

The Somaliland (and wider Somali) economy is strongly based on informal credit, given the absence of a developed banking sector. Livestock are bought by brokers on credit and payment is made some time later in money or goods (or immediately exchanged for goods). Remittances go a long way to ensuring access to credit for numerous households in the small shops that they use; shop-keepers know who does and does not have a regular flow of remittances which will influence his/her ability to provide credit.

Credit has been tightening already in Somaliland due to the COVID-19 related economic uncertainties. Small and medium sized businesses are expressing difficulties in paying rent, staff, taxes and loans, while their sales volumes are shrinking. Some have already started to lay off their employees and some will be vulnerable to closure or bankruptcy. The result could be that creditors will not be able to pay loans while there is no access to formal credit systems. People who were able to obtain credit from the few Islamic Banks in the country, before COVID-19, are concerned that they will not be able to pay the loan with its 12% of murabaha commission.

Somaliland is already feeling the effects of the COVID-19 outbreak. This appears to be more evident – for the moment at least – in financial terms than in health concerns.

The international and domestic lockdown is affecting different sectors of the economy in different ways, with government employees and professionals able to remain at home and minimise movement, while smaller businesses and daily life for poorer groups continues as normal.

The lifting of the Saudi Arabian livestock import ban provides a crucial reprieve at this moment, however it is not clear how long it will last.

Somaliland has been the most stable area of the wider Somali regions for many years, with food security and humanitarian concerns focused further south. These early indications raise the prospect of increasing vulnerability in northern regions.

[1] Somaliland is a former British protectorate which unilaterally declared independence in May 1991. It is however, still internationally recognised as part of Somalia and has maintained a level of political stability and security not seen across large parts of the Horn and East Africa, including holding internationally monitored elections.

Thanks to Laura Hammond and Peter Hailey for valuable inputs.

Note: The CRP blogs gives the views of the author, not the position of the Conflict Research Programme, the London School of Economics and Political Science, or the UK Government.

Dr Nisar Majid manages the Somalia country programme. He has worked in and on Somalia and the Somali territories of the Horn of Africa for twenty years, in various applied research capacities, including for his PhD research which focused on transnational and diaspora aspects of the Somali.