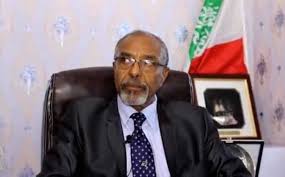 The manager of Civil Aviation and Airports Authority on Saturday has rejected Somali Federal Gov’t claim of controlling its airspace. Captain Mohamed Abdi Rodol flanked by the Director General of the authority have disclosed that Somaliland is free to administer its airspace. He reiterated that there is no other body that is entitled to manage its airspace with Somaliland.

Mr. Rodol has announced that Somaliland is responsible for managing its airspace as it is capable of securing its borders be it sea and land. The head of civil aviation authority has accused the administration installed in Villa Somalia, Mogadishu is trying to cause confusion in Somaliland’s airspace. Mr. Rodol has told the international community and int’l airlines that scheduled direct flights to Somaliland that Somaliland government is fully responsible and and the airspace solely belongs to her.

In addition, Mr. Rodol said that Somaliland is in charge of its security and decides which airline flight to land in her soil. He promised that Somaliland is committed to live in peace and harmony with its neighbors and further reiterated that Somaliland does not want to cause confusion in the airspace. He announced that every airline company which is interested to start flights that they can come to Somaliland but added that there are airlines that the civil aviation authority banned its operations due to the outbreak of the novel corona virus disease. Somaliland has contested Somalia’s claim that it had diverted Fly Dubai airline flight which was destined to Hargeisa airport but Somalia’s aviation authority had claimed it had informed the pilot that it could not land in Hargeisa over int’l flights ban. The two countries are now at fresh odds over the airspace row owing to the outbreak of Corona Virus around the globe.