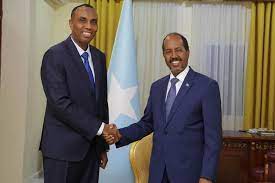 Somalia’s President Hassan Sheikh Mohamud and Prime Minister Hamza Abdi Barre have intervened in a dispute over a move by Puntland authorities to block deputy speaker of parliament from visiting the coastal town of Bosaso as reported on Wednesday.

Hours after returning from a four-day trip to Eritrea, Mohamud held meeting with his Prime Minister and the deputy speaker of parliament Sa’diya Samatar to discuss efforts to soothe tensions in northeastern regional state.

Somali federal authorities convinced Sa’diya not to hold a press conference in which she would condemn Puntland’s decision to obstruct her visit to prevent a further escalation of tensions frayed by her trip on Monday.

Regional authorities forced the return of a flight carrying humanitarian aid and the deputy speaker of parliament to Mogadishu, shortly after landing at an airport in Bosaso. The move triggered a gun battle between units within regional security forces as members of an elite counter-terrorism force attempted to force their way into the airport to escort Sa’diya and her delegation.

Puntland Ministers of Security and Interior called the incident unfortunate, saying that they had not been informed in advance about the arrival of the deputy speaker of parliament, though the MP has later told media that officials, including region’s deputy president, were aware of her trip.

Somali President held a phone conversation with Puntland leader Saeed Abdullahi Deni and apologized over the deadly incident in Bosaso, urging the regional leader to arrange a meeting between Puntland and federal authorities in the town of Garowe to bring an end to the renewed rift.

Puntland Vice President Ahmed Karash, who has long been at odds with Saeed Deni, on Tuesday sacked two regional ministers, in a move that many fear may worsen the current wrangling in the region.

At least 18 soldiers were killed in a fighting in Bosaso on Monday and troops involved in the gun battle are still holding rival positions near the city’s airport amid fear by residents over fresh flare-up of violence.