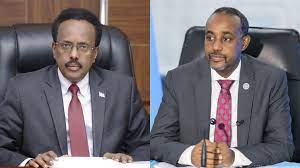 Somalia’s President Mohamed Abdulalhi Farmajo said that he suspended the Prime Minister Mohamed Hussein Roble until an investigation into land-grabbers case is completed, making a further escalation of tiff over delay of the election process. Roble rebuked Farmajo for issuing a statement in which he expressed an intention to pick a new and capable PM to spearhead elections, alleging that the incumbent’s ineptitude has led to successive delays in the electoral process. The PM said Farmajo is determined on disrupting the ongoing parliamentary vote. Roble replaced Defense Minister Hassan Husein Haji with Abdikadir Mohamef Nur, the former minister of Justice and transferred Haji to a new post as Justice Minister. Farmajo said the move was intended to stop the graft probe against the PM. Somalia’s deputy information minister, Abdirahman Al-Adala said on Monday a “coup” was in progress in the capital Mogadishu after troops had been deployed to take over the PM’s office following an announcement by the president that he had suspended the PM over corruption probe.