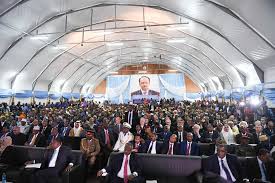 With full elections unlikely in 2020, the incumbent is trying to lock down the support of lawmakers who will again select the president.

Although it has not officially kicked off, Somalia is already effectively in the thick of an election season. The current administration’s mandate will end in 2020 and President Mohamed Abdullahi Mohamed (known as “Farmaajo”) has been busy manoeuvring in order to secure a second term.

As of yet, no electoral model has been agreed for 2020, but Somalia is unlikely to hold nationwide one-person-one-vote polls despite the government’s insistence and the international community’s hopes. With the Islamist militant group al-Shabaab still launching attacks and seizing towns, the security situation has not improved sufficiently since the last electoral process in 2017. Additionally, Somaliland’s self-declaration as an independent state means it will not participate in any Somalia-wide polls.

Given these circumstances, the most likely scenario is that the country’s next president will once again be selected by the 329 members that make up the Lower House and Upper House of parliament. Before that, however, regional states will hold their own electoral processes to select those national lawmakers. State legislatures will vote for senators to take up seats in the Upper House. Traditional clan elders will put together electoral colleges of voters that will select MPs to go to the Lower House.

Given that Somalia has no truly independent electoral commission, the national government can exert considerable influence in these processes. Thinking ahead to 2020, President Farmaajo has been taking advantage of this in order to fill parliament with as many supporters as possible.

The balance of parliament

The number of seats in Somalia’s parliament, divided by region, will look this:

President Farmaajo can expect significant support from several of these regions. Somaliland’s members, for instance, are largely imposed by the government in Mogadishu given that the region refuses to take part in Somalia’s national politics. The federal government also appoints the governor of Benadir, which will allow it to influence the selection of that region’s representatives. Meanwhile, the Farmaajo administration was been able to install its candidate of choice in South West and managed to bring the leadership of Hirshabelle into its fold.

It has found it harder to influence some other regions. Puntland held successful elections in early-2019 during which it explicitly warned the federal government not to interfere. And Jubaland carried out a tumultuous process, marred by the banning of some opposition leaders and boycotts by others, that led to the re-election of the incumbent – though the result is yet to be recognised by the Federal Government or international community.

Adding this all together, there are 187 lawmakers from regions under the relative influence of the Farmaajo administration. This is about 57% of the total and slightly higher than the 184 votes the president garnered in 2017, but the support of all these parliamentarians is not assured. This is why the Farmaajo Administration has recently focused its efforts on Galmudug, the final state yet to hold regional elections.

All eyes on Galmudug

Earlier this year, Prime Minister Hassan Ali Khayre embarked on an exceptional 40-day stay in Dhusmareb, the designate capital of Galmudug. The visit was hailed a success as it helped resolve two potentially problematic issues.

First, the Prime Minister managed to ease divisions that had led the region to have two parliaments and two presidents based in separate towns. As part of this, he persuaded the regional president Ahmed Gelle to accept an election. Gelle had previously refused, insisting that he was due a whole four-year term after he replaced his predecessor who resigned in 2017.

Second, Khayre helped put to an end, at least for now, to the rule of the unelected but powerful religious sect Ahlu Sunna Waljama’a (ASWJ) in Dhusmareb and neighbouring towns. This was unlikely to have been achieved without the help of the federal government. Its intervention was notably lauded by the opposition as well as the government’s supporters.

Since that visit, some of the positives of the prime minister’s stay have been undone. Despite the constitution stating that regional elections are matters for federal member states, the government in Mogadishu put together an electoral commission and flew it to Dhusmareb this October. The dismayed Galmudug administration responded by appointing its own electoral commission.

Galmudug has now started its process of selecting lawmakers. Given the unclear balance in parliament, Farmaajo will be hoping its outcome definitively cements his authority and allows him to comfortably win a second term in office in 2020.

Since the establishment of Federal Member States in recent years, successive governments in Mogadishu have attempted to intervene in regional elections to secure their own power. This is unlikely to change until Somalia builds a judiciary that is strong and independent enough to enforce the constitution in an impartial manner. As it stands, there is little separation of powers in Somalia today. Both the current and previous administrations installed their own chief judges in the High Court, placing the judicial branch under the control of the executive.

Somalia faces many hurdles, but without an earnest attempt to rectify this issue, it is unlikely to ever transition to a universal franchise and away from in its current state of perfect political paralysis.

Sakariye Cismaan is a political commentator, researcher and analyst on Somalia.