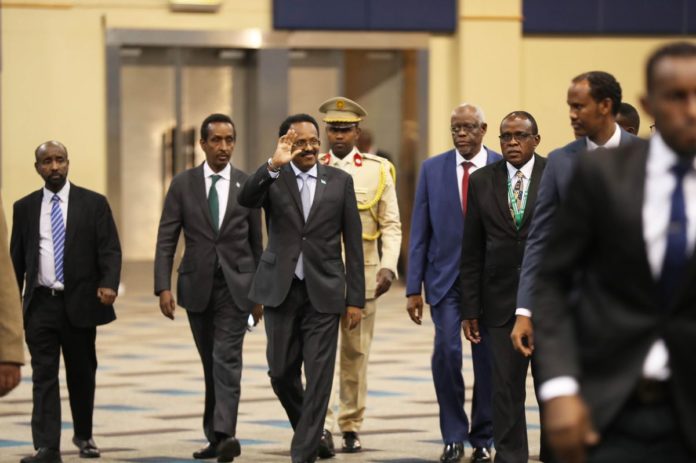 In what could be now a diminishing relationship between Kenya and Somalia, President Mohammed Farmaajo on Monday snubbed Kenyatta International Airport on his way to Mogadishu, a sharp shift from his traditional travelling arrangements.

On Friday, Farmaajo snubbed JKIA and opted to travel directly to Pretoria, where he attended the inauguration of President Cyril Ramaphosa.

“President Farmaajo avoids transiting through Nairobi on his way to Pretoria for the swearing in ceremony of South African President Cyril Ramaphosa amidst diplomatic tension between #Somalia and Kenya following the detention of a Somali minister & two Senators this week,” RTN Somali TV tweeted.

Kenya and Somalia are embroiled in a tussle over rich oil fields along disputed Indian Ocean maritime border. The two nations are set to face off at the International Court of Justice later on in September.

And on Monday, State House Director of Communications Abdinur Mohamed indicated that Farmaajo had opted to use Dar es salaam airport on his way to Mogadishu, a development that means he’s no longer interested in working with Kenya.

“H.E President @M_Farmaajo departs for #Mogadishu via Dare es Salam, after the conclusion of his 3 day visit to South Africa. We’re grateful to South African govt for the warm reception. Many thanks to our Somali Community in South Africa for the great interaction and hospitality,” he tweeted.

Last week, a junior minister and two senators were denied entry to Kenya at JKIA despite having diplomatic passports. And Somalia has since blocked her officials from conducting meetings in Nairobi.

But Foreign Affairs minister Monica Juma, in a rejoinder as quoted by the Nation, insisted that everybody who travels to Kenya must have a Visa. She did not however, give reasons why some members of Somalia delegation with only Western passports were allowed in.