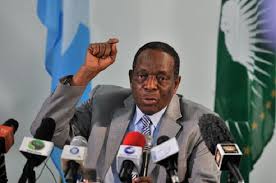 Since then, the African Union Mission in Somalia (Amisom) has continued to register progress in implementing its mandate, guided by the transition plan.

The Somalia Transition Plan is a comprehensive guide developed by the Federal Government of Somalia and its partners to the transfer of security responsibility to Somali National Security Forces ahead of Amisom’s anticipated exit in 2021.

As a key player in the Somali security sector, Amisom has made tremendous progress in implementing key programmes and activities since 2018, when we commenced implementation of the first phase of the transition.

Important targets that we set out to achieve as part of our Somalia exit strategy are being completed.

All this would not have been possible without the strategic partnership and involvement of the Somali authorities who are in agreement that Somalia’s security forces should take over from Amisom.

The past year has witnessed developments on the security front where Somali security forces have proved their increasing capabilities.

We have seen the forces attack, win and hold ground. This is a strong signal to the terrorist groups that their days of terror are numbered.

A professionally trained and well-equipped Somali security force is indeed a game-changer in the fight against terrorism in Somalia.

In the Lower Shabelle region the Somali National Army (SNA) alongside Amisom forces, have conducted operations that have seized territory and pushed back the terrorists.

The most recent victories were recorded in Sabiid and Bariire. For seven years, Sabiid was a base where terrorists assembled explosives, but now it iA professionally trained and well-equipped Somali security force is indeed a game-changer in the fight against terrorism in Somalia.s liberated.

This is proof that given the right conditions, the Somali National Army (SNA) is capable of leading successful anti-terror operations and can take over security responsibility of their country.

These conditions include among others generating the required troop numbers, proper training, equipment and payment of salaries.

We salute international partners such as European Union, the United States, Germany, and the United Kingdom who continue to support efforts to build the capacity of the Somali Security Forces – both the federal and state police and military – through recruitment and training.

With support from international partners, the Somali Security Forces are securing the populations in the recently liberated areas, conducting patrols, securing critical infrastructure including roads, hospitals, schools and are supporting the running stabilisation and early recovery activities.

So, since December 2017, Amisom has been reducing its troop numbers, in line with relevant UN Security Council decisions.

The UN has set December 2021 as the date when Amisom will fully exit from Somalia. This year in February, Amisom completed a further reduction of 1,000 troops.

This reduction in Amisom troop numbers has also meant that AMISOM has to hand over Forward Operating Bases (FOBs) and other facilities to the Somali security authorities.

Last year, Amisom developed a new Concept of Operations (CONOPs) to support the implementation of the Somali Transition Plan which guides our exit strategy.

As part of the operationalisation of CONOPs 2018/2021, Amisom has been reconfiguring its military, police and civilian components.

The military commanders of Amisom and SNA have since developed a detailed plan to implement the military aspects of the CONOPs.

Under the reconfiguration, Amisom will either collapse some FOBs or hand them over to Somali security forces. Already, in Jubaland State, Amisom has handed over the Via-Afmadow base to Jubaland security forces.

The brave men and women of Amisom police continue to provide operational support as well as training and mentoring to federal and regional police.

Two additional Amisom Formed Police Units and 67 Individual Police Officers are to be deployed to boost training, mentoring and support to the national elections scheduled for 2020/2021.

We have also made significant progress with the deployment of Amisom civilian staff to support and complement the activities of our military and police components and to boost the institutional capacity building and broader stabilisation and recovery efforts in the federal member states of Jubaland, South West, and HirShabelle.

With this, we shall be able to help secure the gains that we’ve made over the twelve years since Amisom first deployed in Somalia.

With all our efforts dedicated to the transition plan, we envision that by 2021, Somali Security Forces will be ready to fully take over security responsibilities of the country from Amisom.