Somalia’s security forces have detained a government soldier who is facing accusations that he raped a four-year-old girl in Mogadishu yesterday. The incident angered local residents. According to the victim’s family, the rape happened in Mogadishu’s Wadajir neighborhood at around 10:30 am on Thursday May, 14 when the soldier named as Mohamed who lived next to the victim’s family sneaked into their house while the mother went for shopping to nearby market. The young girl was seriously injured in the sexual assault and was rushed to local hospital for treatment. The suspect is under police arrest at Wadajir police station while further investigations underway. Two young girl aged four and five were abducted and brutally gang raped in a field nearby Afgoye town located 30 km west of Mogadishu. Rape victims are traditionally compelled to marry their rapists in Somalia. Rape cases go unreported and the perpetrators go unpunished in Somalia. 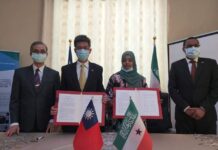