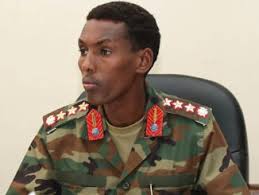 The army chief cited that civilians who wear military uniforms and posing as members of Somalia’s defense forces in a bid to put the public in a harm’s way will be punished.

Odowa said that civilian vehicles painted with military camouflage will also be seized.

He said: ” It is not permissible to paint military camouflage to civilian cars.”

Somalia which is battling against the Al Qaeda affiliated militant group of Al shabab fighters wear military uniforms posing as Somali military members and carry out attacks against civilians and government officials.