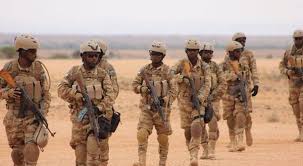 The commander reiterated that the operation which is aimed at flushing out al shabab militants from the regions continues.

The troops have killed a foreign al-shabab officer from Mali in West Africa named Abu Ayman.

The commander further stated the two other al shabab officers will be identified later on.