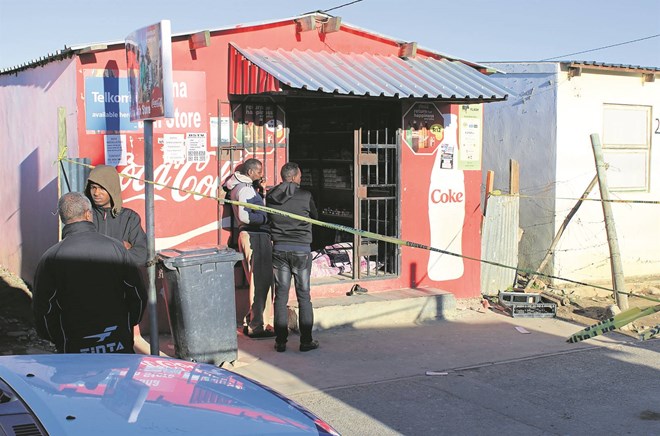 Somali nationals on the scene where the 37-year-old Somali shopkeeper was fatally shot by robbers on Tuesday morning 11 June.PHOTOS: Mzwanele mkalipi

Residents of Mkhungela Street woke to the sound of gunshots in the area.

Two Somali nationals, a shopkeeper and his assistant, were attacked and shot by robbers on Tuesday morning.

The 37-year-old shopkeeper was fatally wounded in the neck, and was declared dead at the scene, and his assistant was shot in the arm and is recovering in hospital.

According to Ahmed Moosa, another Somali who was at the scene, two men arrived at the Bafana Cash Store in Asanda Village around 07:00.

Aside from shooting their victims, they robbed the store of cash and cigarettes.

“They took money, cigarettes and shot the owner inside his shop,” Moosa told City Vision. “One was wounded in the shoulder and was rushed to hospital.”

Soon after the incident occurred a group of Somali nationals were on the scene to see what they could do to help.

A crowd had gathered when City Vision arrived at the scene just before 09:00.

Blood was on the ground and the dead Somali national still lay in his shop covered by a blanket.

A neighbour said the shopkeeper, known as Madala, had been in the area for three years.

“Both these Somali men were very nice people,” she said. “It is very sad to see what has happened here this morning.

“One of them lay crying on the ground before the ambulance took him away. The other was alive for a while, as we could still see him moving, but he died soon afterwards.”

He said charges of murder, attempted murder and business robbery have been opened.

“At this stage, we can’t confirm how many suspects entered the shop, or the model of the car they were driving,” Gama said.

He added that police were requesting the help of anyone with information that will lead to the arrest of the killers to contact Lwandle detective Sergeant Bongekile Ntsontso, who is eager for justice to be served at the earliest opportunity.