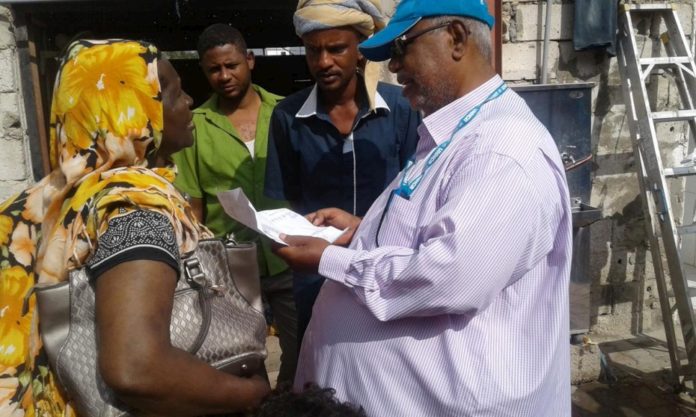 More than 4,800 Somali refugees have now returned home from Yemen since UNHCR, the UN Refugee Agency, commenced an Assisted Spontaneous Return (ASR) programme in 2017. In the latest departure, a boat carrying 114 Somali refugees left the Port of Aden on Monday and arrived at the Port of Berbera in Somalia today.

With Yemen experiencing prolonged conflict and civilians facing life-threatening conditions, the situation for refugees, asylum seekers and migrants in the country has deteriorated significantly.

In addition to the dangers posed by ongoing hostilities many refugees are now encountering increased hardship, lack access to basic services and struggle to cover basic needs and sustain themselves given limited work and economic opportunities. UNHCR and humanitarian partners also face significant challenges in ensuring safety, humanitarian assistance and access to essential life-saving services for refugees and asylum-seekers in the country.

Some of the refugees returning home in yesterday’s ASR movement told UNHCR they were optimistic about a new life in Somalia and were hopeful that they will be able to secure their livelihoods by starting businesses. One father told UNHCR field staff that he aims to open a small business once home and provide a better life for his four children, including his one-year-old daughter who was the youngest passenger on the boat.

As a long-standing refugee host nation and the only country in the Arabian Peninsula which is signatory to the Refugee Convention and its Additional Protocol, Yemen hosts the world’s second largest Somali refugee population, some 250,000 people.

Refugee movements from Somalia to Yemen have been taking place since the 1980s. They continued following the outbreak of civil war in Somalia, with many fleeing generalized violence and individualized fear of persecution in addition to the consequences of drought and a lack of livelihood opportunities.

“An increasing number of Somali refugees have been approaching us for help to return home. After years of life in exile, the decision to return is a difficult one to make but given prevailing conflict, insecurity and deteriorating humanitarian conditions in Yemen many tell us they are ready to go back and are hopeful about the future,” said Gwendoline Mensah, UNHCR’s Assistant Representative in Yemen.

Thirty-seven organized departures have now taken place from Yemen to Somalia since the ASR programme commenced two years ago. The program is facilitated by UNHCR in cooperation with humanitarian partners and authorities in Yemen and Somalia.

Those returning home are assisted by UNHCR and partners, including the International Organization for Migration (IOM). They are helped with documentation, transportation and financial support in Yemen to facilitate the journey, as well as return and reintegration assistance in Somalia.