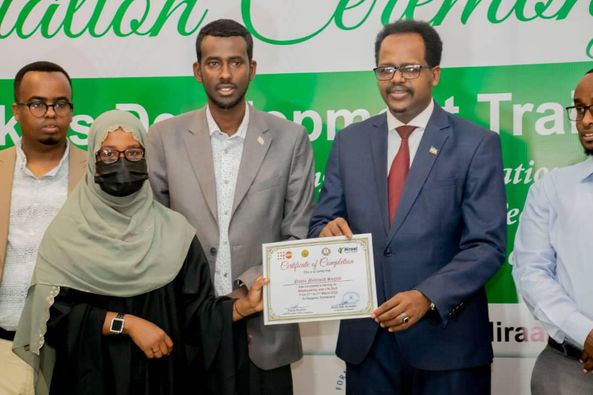 The local organization SOHASCO, has awarded certificates to 470 young people who have completed different vocational trainings.

At a well-organized event held at the Hiraal Youth Center in Hargeisa, SOHASCO, in collaboration with UNFPA and the Somaliland Ministry of Youth and Sports, 470 students both boys and girls have concluded 13 vocational trainings.

The ceremony was attended by Somaliland government officials, UNFPA Deputy Chief of Staff and other officials.

All the officials who spoke at the events congratulated the graduates, while also highlighting the benefits of vocational training to the community and urged the graduates to continue their efforts.

The Deputy Minister of Education and Science of Somaliland, Hon. Abdihakin Said Bustaale, who addressed the gathering, highlighted the benefits of vocational training, “Our society and our young people understand that skills are a big part of the development of human life”.

He congratulated the local organization SOHASCO for giving today’s graduates the opportunity to study.

SONYO Director Abdihamid Mohamed Omar, who spoke at the event, said “On behalf of the Somaliland youth, I would like to thank UNFPA, as well as various government agencies.”

“We are pleased that so many young people have today completed their vocational training and given this opportunity to both SOHASCO and UNFPA,” said Khadar Barud, deputy governor of Marodijeh region.

At the end of the ceremony, certificates were awarded to the graduates.