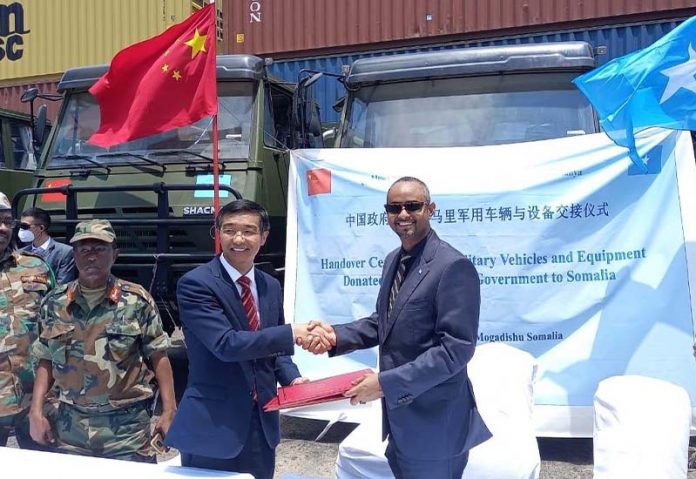 China’s supply of military trucks and other equipment to Somalia amid a visit by Somaliland President to the United States was a provocation aimed at undermining  Somaliland’s ties with Taiwan and Washington, regional official said on Friday.

Somali Minister of Defense Abdikadir Mohamed Nur received a consignment of military hardware donated by China on Friday, in an event attended by Chinese ambassador to Somalia.

In a tweet, Chinese ambassador Fei Shengchao said he was happy to attend the handover ceremony of Chinese military vehicles and equipment to Somali authorities at the Seaport of Mogadishu.

In response, the Director of Somaliland’s Presidency Mohamed Ali Bile said the move aimed to disrupt burgeoning relations between the break-away region and Taiwan.

“China’s supply of Military hardware to Somalia in a time when Somaliland President… is visiting USA is not a coincidence but a provocation to disrupt Somaliland’s relations with Taiwan and the emerging partnership with the US,” Mohamed Ali Bile tweeted.

Last month, a delegation led by Somaliland Minister of Foreign Affairs Eise Keyd pitched investment opportunities in the region’s untapped oil and gas reserves during a high-profile visit to Taipei, triggering the ire of both Beijing and Mogadishu.

In comments on Chinese condemnation of his visit to Taiwan, Somaliland Foreign Minister said last month that China cannot dictate who the self-proclaimed state can have relations with as it was a sovereign nation and “born free”.