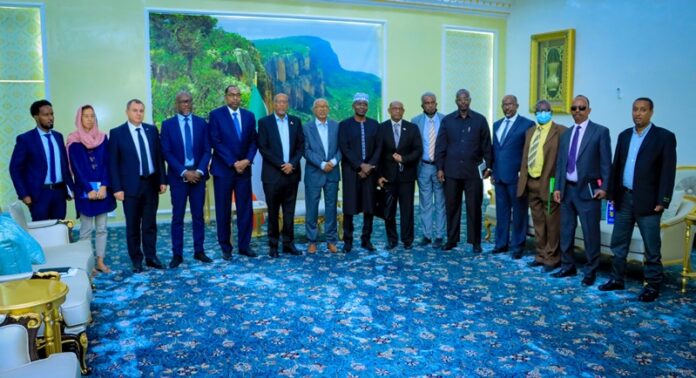 A delegation consisting of senior UNHCR officials headed by its Special Envoy to the Horn of Africa, Mr. Mohamed Abdi Afey, and is accompanied by UNCHR special representative to Somalia Magatte Guisse, who are on a mission to Somaliland, met today with SL President H.E Musa Bihi Abdi, at the presidential palace, in Hargeisa, Somaliland capital. The two sides have exchanged views on the close working collaboration between the two sides, and the number of refugees that Somaliland is hosting at the moment. SL said in a statement released by the presidential palace, that it is currently hosting up to 14,000 who are from the Horn of Africa and beyond. SL and UNHCR reached a mutual understanding that the UN body must provide assistance to the refugees in the country. SL informed the UNHCR to set up refugee camps that will host people that SL government recognizes its refugee status. As assessment will be conducted to further conduct feasibility study when it comes to the best locations that will be appropriate to set up the refugee camps in the short and long term as well as its administering. SL, UNHCR saw eye-to-eye that it is of high priority to form a technical committee from both sides that will assess the dire situation faced by refugees in Somaliland and the best way to handle their predicament. Deputy President, FM, head of refugee agency and the president’s special envoy to UN were in attendance of the meeting.