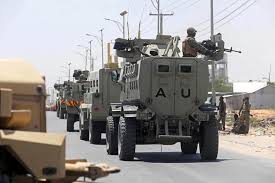 African Union Peacekeeping Mission in Somalia on Thursday debunked allegations that its forces provided support to the Somali government and Galmudug forces, who had been battling Ahlu Sunna fighters in the town of Guriel.

The accusations are “false”, toxic and malicious,” with an intention to cause disaffection between Amisom and the Somali communities, the AU peacekeeping mission said.

The statement comes after Ahlu Sunna group claimed that the AU peacekeepers had assisted the Somali army in an offensive that has forced the rebel group’s fighters to vacate their positions in the town after four day long battle.

“In a fulfilment of the mandate, Amisom reinforced its forces in Dhusamareb for the purpose of securing the on-going electoral process as part of the National Elections Security Taskforce Strategy.

Amisom had stressed that it constantly urged both sides to stop the fighting and end their dispute by peaceful means.