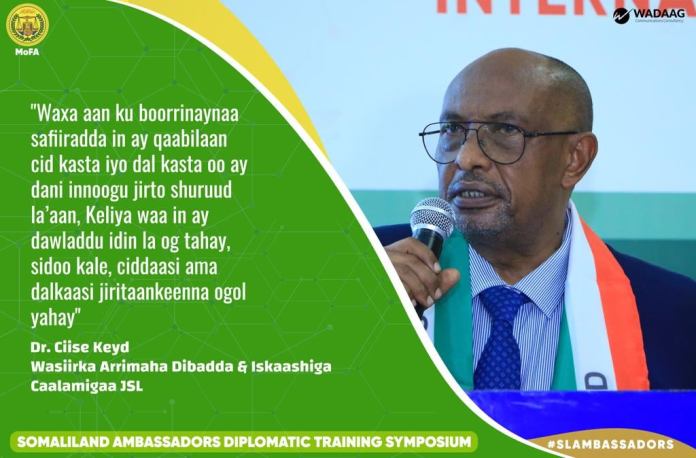 The workshop, which was attended by all Somaliland ambassadors accredited to foreign nations, will be reviewing, rejuvenating and formulating the Somaliland’s new foreign policy plan.

DG Mohamed added that it was an opportunity for ambassadors to benefit from different expertise of different diplomats and professionals specialists in global politics, such as Dr. Iqbal Jazhbai who trained diplomats from 120 countries invited to give lectures at this meeting.

Deputy Foreign Minister, Hon. Abdinasir Omar Jama, who spoke at the event, stated the aim of this training initiative is to pursue foreign policy as an opportunity for cooperation and as a basis upon which to build the foundation for a working partnership on global matters.

He noted that such consultative meetings would be regular in the future.

The Minister of Foreign Affairs, Dr. Essa Keyd, called on the ambassadors present to welcome anyone and every country unconditionally if deemed to be in our interests, upon notification to the government, especially for those of countries sympathetic to our cause or acknowledging the existence of Somaliland.

Dr. Isse said that the meeting, which will feature different lectures by international political experts, is to convey a unified message about the recognition of Somaliland to the countries represented by all our ambassadors, wherever they are.

The meeting was likewise addressed by the Mayor of Berbera, the RG of Sahil region, and the chairman of the foreign affairs committee of the Somaliland parliament; all commending the symposium of Somaliland ambassadors facilitated by the ministry, hence suggested that it be bolstered.

The week-long workshop is expected to conclude with decisions to accelerate Somaliland’s foreign policy and virulent lobbying.