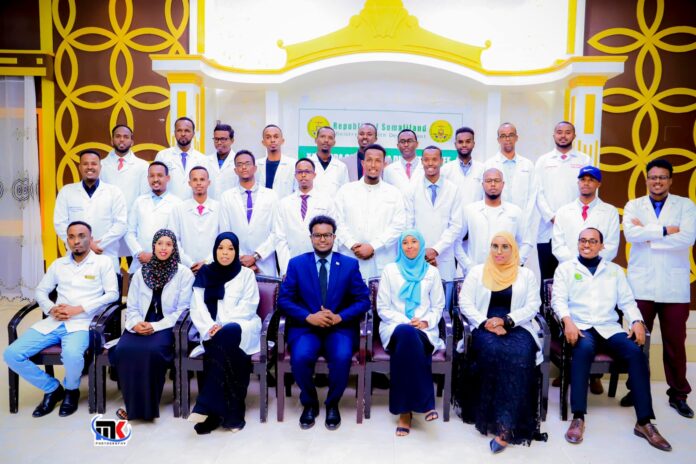 “Citizens of Somaliland who are in trouble in Ethiopia should contact their embassy and government.”

Deputy Ambassador of the Republic of Somaliland to Ethiopia- Barkhad M. Karie -Interview

Somaliland Deputy Ambassador to Ethiopia Barkhad M. Karie revealed that doctoral degree scholarships for 25 doctors traveling to Ethiopia were out of courtesy of the President H.E. Muse Bihi Abdi who was behind its funding and facilitation. This, he noted was a task that the Embassy has been working on for a year.

Deputy Ambassador Barkhad stated that during his tenure as the Acting Ambassador of the Republic of Somaliland embassy in Ethiopia, he worked to initiate an official education agreement between Somaliland and Ethiopia, which will be signed soon.

In an exclusive interview with THT’s Mohamoud Walaaleye, on Wednesday, February 16, 2022, Ambassador Barkhad said that there is an awareness at this time that our society, especially the business community, with the help of the Somaliland government prepares to start exporting locally produced products with high quality to foreign markets . See below excerpts from the ithe nterview:

Q: Recently, Somaliland Embassy in Ethiopia and the Ministry of Health has announced 25 doctors given specialist medical scholarships to Ethiopia. So, is the scholarship fully funded or partially funded?

A: We have been working on the Scholarship in Ethiopia for more than a year, and this project has been facilitated, funded, apart from Allah’s grace, by the President of the Republic of Somaliland H.E. Muse Bihi Abdi. It is a governmental endeavor hence the scholarships and the knowledge they are seeking is an opportunity that do not exist in our country.

Ambassador Barkhad said that the 25 doctors have passed the entrance exams, and will be trained by 10 different specializations where few or none were known in our country. It is a scholarship funded jointly by the governments of Ethiopia and Somaliland, with the Ethiopian government paying for the education expenses, and the government guarantees the cost of hostels.

Q: Ethiopian Scholarships to Somaliland Students are not consistent, is it not possible for the two nations to agree on a certain number of quota?

A: In fact, limited numbers are often better than increasing numbers, and it is a plan that we have been working on for some time. For example, in 2022 the number of scholarships was 50 times higher than in the previous year, 2021. In terms of education agreements between the two governments, during my time as an acting ambassador of the Republic of Somaliland to Ethiopia, I worked to develop a comprehensive educational agreement with Ethiopia, we have succeeded and expect to ink two nations near future.

Q: In Ethiopia, for more than a year there has been a political crisis that has led to war, there are SL students trapped in the Tigray region, but later received by agencies, although the fighting has not officially ended, sending new scholarship of Somaliland doctors, isn’t risky, what’s your take?

A: First of all, the evacuation of students has been carried out by the Republic of Somaliland, represented by our Ethiopian embassy.   At that time, all plans were finalized and implemented by all relevant government agencies, in particular, with the Ministry of Foreign Affairs, Education and the Presidency.

On sending new students, the plan to send 25 Doctors for Scholarships to Ethiopia is not a risk to the students for two reasons; First of all, the situation in Ethiopia is very good at the moment, and it is safe. This is something we thought about during the planning process, and there is no risk of insecurity.

Q: There are many Somalilanders who travel to Ethiopia for various reasons, be it health services, special education, export issues, do you have any data on the total number of citizens in Ethiopia? Are there any utility services you provide and more?

A: During my two years and over, working at the embassy, ​​with the help of embassy staff dedicated to the work of the Nation and the relevant Ethiopian government agencies in general, we have been able to set up a ‘citizen database’, in particular students and health associated visitors who are the largest group of us in Ethiopia.

We have started a variety of services at the Embassy of the Republic of Somaliland in Ethiopia to assist our citizens in Ethiopia, depending on their needs. For example, our students in Ethiopia, who in the past applied for a ‘Special Card’ in Ethiopia, are currently provided by the Somaliland embassy in Addis Ababa for free.

For Somalilanders who come to Ethiopia for medical services, who have previously faced challenges in their medical needs in hospitals, such as language interpreters and doctors, we have a Department of Social Affairs at the embassy,  it’s a community departmental dedicated to assisting socio-medical needs with the help of Somaliland medical students studying in the capital Addis Ababa.

Further, during my acting Ambassador at the embassy, for the first time, we have been able to start issuing the Somaliland Community ID cards. It is a document that is recognized by the Government of Ethiopia and facilitates the needs of the citizens of the Republic of Somaliland, such as travel within Ethiopia.

In addition, a “Go Home” services has been developed and issued to Somaliland citizens whose passports are lost or stolen, making it easier for them to leave the country legally. We have achieved a lot during my tenure and all of them have been the first priority in fulfilling the duties of the Embassy of the Republic of Somaliland in Ethiopia and the officials present, and we have succeeded, thank God, in fulfilling the duties of the citizens of Somaliland owed.

A: Brother, there are formal agreements between Somaliland and Ethiopia, but one thing we need to understand; in most cases, it is not possible to explain everything in detail, depending on the interests of the nation and the governments involved. Every country has its own data security reservations.

Q: Trade from Ethiopia, first and foremost is khat, a trade that puts a great strain on the Somaliland community and the nation both economically, medically, and socially, and illegal importation of alcohol and cannabis. What do we exchange; further, If Ethiopia does not help us in the fight against drugs entering on their side, what is the point of our border protection agreements with them?

A: First of all, every country has its own laws, and prohibits those things that are against their laws. So as I said before, the security and legal relationship of the two countries is secure, after all, it is the responsibility of each country to manage its own interests. That is why our security forces are conducting operations against these substances, alcohol and cannabis, and many has succeeded in eradicating them.

Coming back to the answer to the question, what do we exchange? As a society we (Somaliland business people) are required to prepare locally produced products and sell them to foreign markets, starting with Ethiopia. It is a wake-up call at this time that our traders, with the help of the Somaliland government, are planning to export high-quality locally manufactured goods. I hope that the time will come when the volume of our exports will be formidable as the rest of the world, but it depends on our efforts. On the government side, the most important policies and laws that have helped with these issues have been enacted, while others are under process.

Q: As I said before, the balance sheet is the responsibility of both the governments and their peoples, because our market is free, and that gives our citizens many opportunities that other countries do not have. Therefore, it is important that we, as a nation, work together to address this issue. In terms of the role of government, it is on the preparation of laws, policies and other infrastructure that facilitate and some have been developed, others are under process. The development and investment of the Berbera road and the Berbera port are part of the government’s plans to balance trade.

Q: Somaliland businesses face trade challenges with Ethiopia, and always worry of risks to our detriment; while countless businessmen had their merchandise confiscated, do the Somaliland embassy in Ethiopia have their data, wouldn’t that affect the economy of our country? Are there steps taken by the government?

A: First of all we have to understand two; every citizen, citizen and foreigner has a duty to abide by the laws they have in the country, just as our citizens working in Ethiopia have a duty to do the same. Understanding the laws of the land will make it easier for anyone to be careful and not make a mistake. The second point we need to understand is; Somaliland citizens who are in trouble in Ethiopia should contact their embassy and government, and we have a duty to act as soon as possible, which, at this time, we have dealt with and resolved cases involving Somaliland citizens on several occasions. .

Relations between the two countries are at an all-time high. The economic, security, political and social economic interests of the two countries are unstoppable. These are some of the main the reasons why the President of the Republic of Somaliland H.E. Muse Bihi Abdi latest visit to Addis Ababa at the official invitation of the Ethiopian government is achieving. So the growth of the relationship is going on, we will continue, we are at our best.