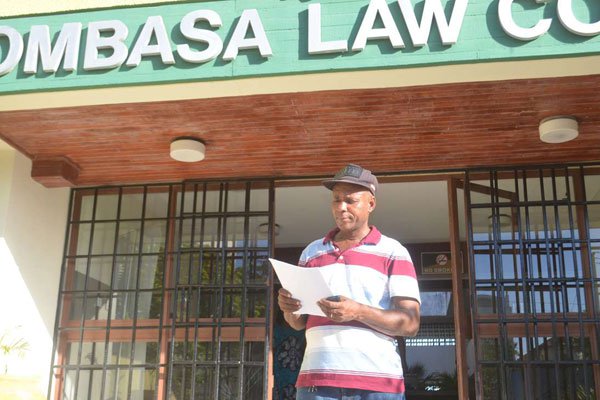 When a group of seamen set sail from Mombasa port to Kismayu, Somalia, to collect cargo, they had no idea that the journey would lead them straight into the hands of police and court where they would face terrorism charges and eventually end up broke and abandoned.

It all began on October 24, 2016, when Jamal Bandira contracted MV Nasibu’s captain Osielo Okoth Oking and his crew of Stephen Mulinge, Harry Randu and Juma Waziri Kingi to sail to Kismayu and ship goods back to Mombasa.

They had done similar trips and were at ease. On arrival in Kismayu, MV Nasibu was promptly loaded with cargo and they set sail towards Mombasa.

The voyage to Mombasa was set to take two days but they ended up marooned in the ocean for four months.

Upon reaching Kilifi, the vessel was short of fuel, developed a mechanical problem and almost stalled.

Then their nightmare began. Marine police patrolling the Indian Ocean waters arrested and escorted them to Kilifi Police Station on suspicion that they were terrorists.

They were remanded, arraigned and later freed after securing bond.

They resorted to operating from the vessel as they attended court sessions. The crew said their tribulations multiplied when the owner of MV Nasibu, Mr Mumin Ali, abandoned them and even refused to pick their calls.

Mr Bandira, the owner of the cargo, said in court documents that he arranged for their bail, food and water.

They remained aboard the vessel until February 20, 2017 when the case against them was terminated for lack of evidence.

“The owner of the vessel did not at any time communicate with us or offer any help,” Mr Randu said. They proceeded to Mombasa port where Mr Bandira received the cargo. Mr Mumin Ali, the ship owner, however refused to pay them and declined to pick their calls, yet again.

The sailors then moved to the Employment and Labour Relations Court in Mombasa and sued the owners of MV Nasibu and Nasibu Fishing Company Ltd, based in Somalia, for compensation and damages. They asked for salary arrears from October, 2016 to March, 2017 and damages.

“The respondents did not communicate to us at all. We were only paid salaries for September 2016 while we were in Somalia. We have not been paid again and those concerned do not bother,” Mr Randu told the court.

But the ship owners denied hiring the sailors. They claimed the crew members were in another ship, involved in wrongful and illegal actions of the owner of the cargo.” They asked the court to dismiss the case.

In his judgment, Judge James Rika noted that for the duration of the trial, the claimants operated from the ship, abandoned by their employer. He agreed with the sailors that they suffered injustice when the ship owner breached the terms of their contract.

Citing ample evidence to link the claimants to the respondent, Mr Rika said there was no doubt that the cargo owner was the only one who came to the crew’s rescue during their tribulations.

“The respondent acted in breach of contract by refusing to pay claimants their salaries and by abandoning them at sea and in court,” the judge ruled.

Mr Rika also awarded the claimants Sh400,000 in general damages for breach of contract and ordered the respondent to pay the cost of the case.