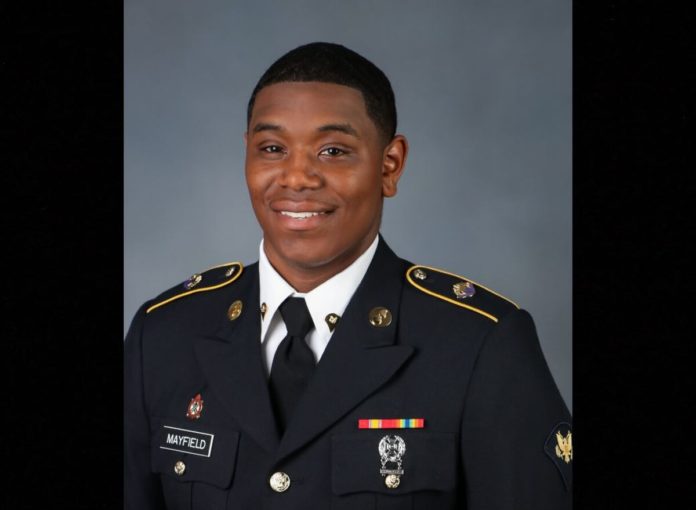 U.S. Africa Command officials believe that al-Shabab militants from Somalia crossed the border into Kenya to conduct an attack on U.S. and Kenyan forces earlier this month in Manda Bay — with the assistance of facilitators within Kenya.

“We assess that these are al-Shabab coming out of Somalia, but with the support of Kenyan facilitators and potential Kenyan aspirants of al-Shabab,” U.S. Army Brig. Gen. Gregory Hadfield, AFRICOM deputy director of intelligence, told reporters Thursday.

“We also assess that after the attack, they’re continuing to make their way back into Somalia as well,” he added.

Army Spc. Henry Mayfield Jr. and two U.S. Department of Defense contractors were killed in the attack on Manda Bay, which is currently under investigation. Although the incident coincided with tensions between the U.S. and Iran, the command previously said they believe al-Shabab’s actions were not related.

“I can’t say with fact what their motivation was, but I can speculate that it’s tied to a false media campaign and tied to recruiting, and tied to anytime they can attack a U.S. anything, anywhere, they will,” U.S. Army Maj. Gen. William Gayler, AFRICOM director of operations, told reporters.

Hours after Hadfield and Gayler spoke, AFRICOM announced it had conducted an airstrike against al-Shabab in Somalia. The command said initial reports indicate two militants were killed in that strike, and no civilian casualties.

AFRICOM spokesman Air Force Col. Chris Karns said that al-Shabab has a tendency to “exaggerate” in their communication as they attempt to recruit and weaken the relationships between the U.S. and African partners. He noted the violent extremist group inserts false narratives and statements into the materials they release.

For example, al-Shabab cautioned African forces after the attack that partner with the U.S. that U.S. troops would desert them “when the situation gets difficult” — similar to what the U.S. did to the Syrian Kurds after hundreds of U.S. troops vacated Syria in October. Roughly 500 to 600 U.S. troops do remain in Syria.

“That’s primarily just part of the propaganda, part of the discussion that they want to see happen,” Hadfield said. “Al-Shabab wants U.S. and other partner forces to be out of Somalia to give them a better opportunity to continue their violence, to continue to have a strong hold within the region.”

“It just probably solidifies the fact that what we’re doing in Somalia is important and is effective because, if it wasn’t, al-Shabab wouldn’t feel the need to message against us,” Gayler said.

Command officials said al-Shabab has the intent to attack U.S. targets, including the U.S. homeland, but military officials expect they do not currently have the capacity to conduct such an attack.

“We assess, based on the persistent pressure that we provide in Somalia, they lack that immediate capability to do that simply because of the pressure applied in Somalia on them now,” Gayler said.

There are roughly 5,000 to 7,000 al-Shabab militants in Somalia, according to the command.

Karns previously told Military Times AFRICOM conducted 63 airstrikes against violent extremist organizations in 2019 — an increase from the 47 conducted in 2018, and the 35 conducted in 2017.

AFRICOM has already conducted multiple airstrikes against al-Shabab in Somalia this month, most recently on Jan. 16.

The Manda Bay attack comes amid reports that the Department of Defense is reevaluating U.S. troops presence in Africa. But the Pentagon will call the final shots on any reduction of U.S. troops in Africa — although no final decisions have been made yet on the matter, according to AFRICOM officials.

“What the Office of the Secretary of Defense and the broader DoD are doing is nothing more than an assessment of globally aligning resources to the National Defense Strategy,” Gayler said.

While French President Emmanuel Macron said Monday during a press conference it would be “bad news for us” if the U.S. cut back its presence in Africa, Gayler stressed that the U.S. would seek input from allies and others regarding troop reallocation from the region.

“Though predecisional, I’m very confident that any decision that’ll be made would certainly be in consultation and coordination with our European allies and others, to include the broader U.S. government as well,” Gayler said.

France has approximately 4,500 troops in West Africa, and Gayler said it was “impossible to overstate” the support the French provide in the region to combat terrorism while backing U.S. troops also stationed there. U.S. troops in Africa have primarily focused on quashing the Islamic State and al-Qaida-linked militants like al-Shabab.

On Monday, Chairman of the Joint Chiefs of Staff Army Gen. Mark Milley told Agence France-Presse the U.S. was eyeing various options to redistribute troops in Africa in an attempt to boost readiness in the continental U.S., or transfer them to the Pacific region.

Secretary of Defense Mark Esper has also repeatedly stressed that China is the Pentagon’s top priority, and said last month that the Pentagon was examining multiple areas of operations to see assess potential adjustments in the U.S. footprint abroad.

AFRICOM emphasized decisions involving troop presence were up to the Pentagon and Esper, and added other combatant commands were also under scrutiny.

“It’s not just AFRICOM that’s going to go through this review. It’s all of them,” Gayler said.

According to a New York Times report from Dec. 24, U.S. officials familiar with the discussions said possible options on the table include pulling several hundred U.S. troops from Niger, Chad and Mali. Another option officials claim has been floated is cutting assistance to French forces in Mali, Niger and Burkina Faso, the Times reported.

Meanwhile, terrorist activity in the Sahel region has spiked. For example, the United Nations Special Representative and Head of the UN Office for West Africa and the Sahel, Mohamed Ibn Chambas, said Jan. 8 that more than 4,000 deaths stemming from terrorist attacks were reported in 2019. That’s five times the number reported in 2016.

“I would think that if you have a problem that’s potentially growing, and you do less, it’s not going to be helpful. That’s logic,” Gayler said.